Exposing the Misery of Child Marriage and Obstetric Fistula: A Conversation with Stephanie Linus on Her Award-Winning Movie, Dry

By Adeola Adeyemo
Shares
b
0
d 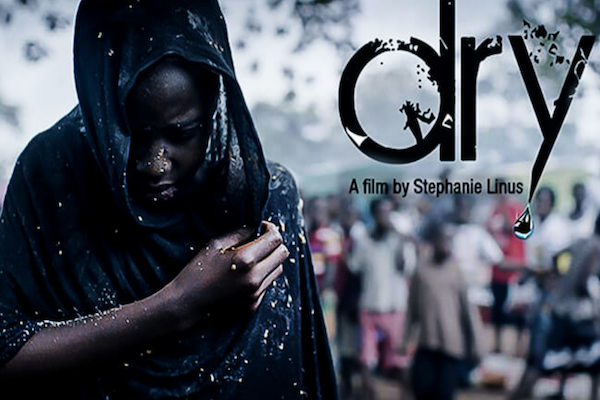 It felt so unfair to me at that time to be able to get an education while some of my peers could not because of this condition.

In the small but growing community of African filmmakers who are pushing boundaries and stunning the world with world-class productions, Stephanie Linus stands out for her ability to grip her audience’s attention with intense scenes and poignant dialogue. Her movie Dry, with its themes of underage marriage and fistula, is an anthem for girl-child rights that has garnered awards from Lagos to Los Angeles.

With Dry, she deftly channels a social justice theme with just the right mix of entertainment and creativity to drive home an important message. And the world is listening. With screenings in countries including the USA, Canada, England, Nigeria, Gambia, and Zambia, Dry has caught the attention of leaders and policymakers as it makes its case for improved maternal health and policies that protect girls and women. It is no wonder that the movie was screened for a second time at the recently concluded Pan African Film & Arts Festival (PAFF) in Los Angeles this February.

Dry won the Programmers’ Award for Narrative Feature during its 2016 screening, and Stephanie was given a special recognition award from the Los Angeles City Council during the official Blacks in Cinema presentation. In a recent interview for Radiant Health, journalist Adeola Adeyemo sat down with Stephanie Linus to discuss the message behind Dry and why it is still so relevant five years after its release. 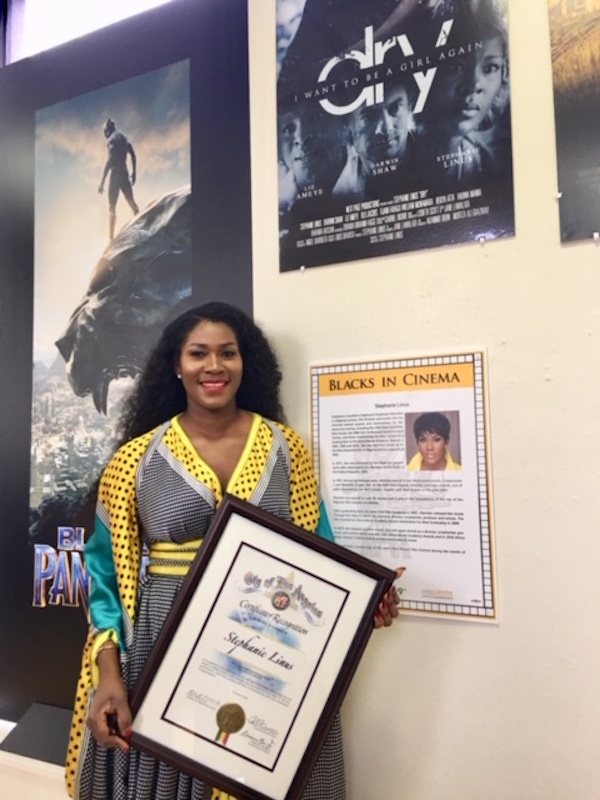 Radiant Health: Your movie Dry was recently screened at PAFF. What was your experience like, and how did the audience respond to the movie?

Stephanie Linus: My experience was wonderful. In 2016, Dry won the Best Narrative Feature award at PAFF and I was unable to attend the Festival at the time. I’m glad I was able to attend this time around.

Dry never fails to connect with people. They connected with the movie at all the specific moments we wanted them to connect. They loved it. At the end of the screening, some people wanted to be of help, and I’m glad we got that response. The important thing for me is that Dry is shifting conversations around the world and shining the spotlight on the girl-child as well as the need to protect her.

RH: In Dry, the main character, Halima, suffers from a condition called obstetric fistula after being forced into marriage at the age of 13. Many people are not familiar with the term. What exactly does it mean to have this condition?

SL: In very simple words, obstetric fistula is the inability to control the flow of urine or feces from the body. This happens when a hole is formed between the vagina and rectum or bladder, leaving a woman incontinent of urine or feces or both. It is most commonly caused by prolonged obstructed labor.

A lot of young girls in Africa and Asia whose bodies are not fully grown are being forced into marriage and childbirth. These girls end up having complicated deliveries, especially in the absence of qualified medical professionals. This often leads to obstetric fistula, and from there on, things take a turn for the worse. They leak urine or feces without control and are ostracized by the community and their families.

RH: Is this what inspired the title of the movie?

SL: Yes. As a girl or woman with obstetric fistula, you are constantly wet with urine or feces. But when you go through a successful repair surgery, you become “dry.”

RH: The fact that Dry was screened at PAFF for a second time is an indication of how good it is. What about its impact? How well has Dry been able to drive social change in a positive direction?

SL: The biggest impact we’ve had with Dry is in creating awareness. A lot of people don’t know how much of an issue child marriage and obstetric fistula is. It has also driven social change in different countries around the world. When we screened Dry at the UNFPA [United Nations Population Fund] African Youth Summit in 2016 to an audience comprising the vice president and several policy makers in Gambia, child marriage was banned in the country a few months later.

We’ve taken Dry to the United Nations General Assembly, the African Youth Summit, and several festivals. Through this movie, people are better informed about the situation and are able to take positive steps to help those who really need it. This is a timeless movie that is set to accomplish the purpose for which it was made. We must eradicate early marriage in our society and protect our girls.

RH: You began your career in entertainment as an actress. At what point along the way did you get that itch to direct your own movies?

SL: There were certain stories I wanted to tell, certain representations of the society I wanted to portray through movies. I needed to get behind the camera and tell those stories. I felt that I had the talent and so why not explore it? And that’s what I did. I had been acting for over a decade before I got into filmmaking, so I learned a lot on the job. I also got some training in the art of filmmaking. 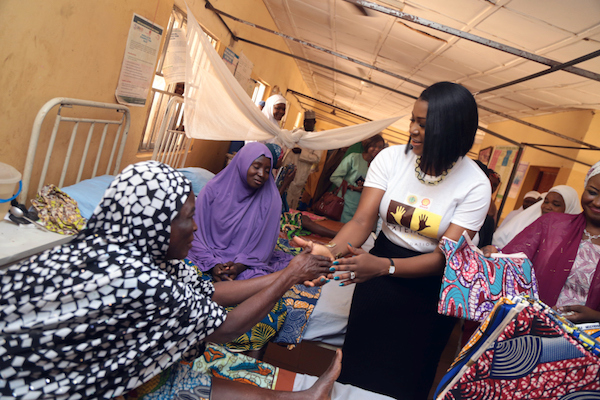 RH: The initial trailer release of Dry coincided with a heated debate on girl-child marriage in Nigeria back in 2014. What progress has the country made in its protection of the girl-child within the past few years?

SL: Nigeria has made some progress in protecting the girl-child, but we still have a long way to go. I’ve been a part of advocacy and projects that educate women and girls against cultural practices such as female circumcision, and I’m so happy those actions are finally yielding results. Since then, Nigeria has passed the Violence Against Persons Prohibition Law, which seeks to prohibit female circumcision, forceful ejection from homes, and harmful widowhood practices.

We’ve also witnessed a lot of community engagement at the grassroot level where traditional rulers are actively ensuring that young girls in their communities are not married off early. It’s a continuous effort and we are still working hard toward protecting everyone. 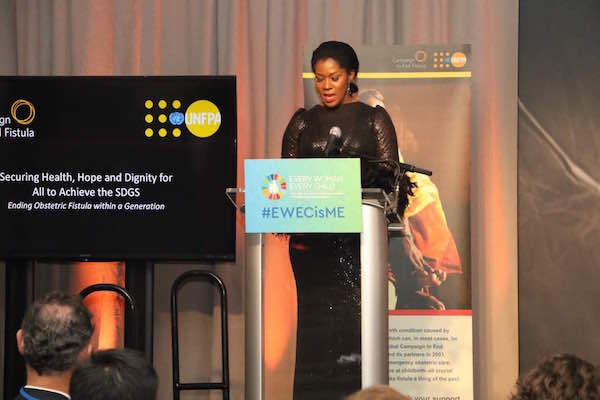 RH: Obstetric fistula is such a devastating condition faced by hundreds of thousands of girls and women yearly, yet not many people are telling this story. What made you decide to give a voice to these women?

SL: I heard about obstetric fistula for the first time as a student in the university from a friend who told me about some of the things she had witnessed during a visit to the northern part of Nigeria. I felt it was a form of injustice for young girls and women to go through such harrowing experiences.

It felt so unfair to me at that time to be able to get an education while some of my peers could not because of this condition. It became a burden on my heart for so long, and when I became a filmmaker, I knew I wanted to tell their stories. I did some research across Nigeria and other African countries where I met with girls and women who had this condition. Their experiences inspired the script for Dry.

RH: What tools have you used to speak out for these girls and women in addition to the movie?

SL: I didn’t just want to tell the stories of these girls and women—I also wanted to help them as well, so I started an organization called the Extended Hands Foundation where we raise funds to do free fistula repair surgeries for people who cannot afford it. So far, we’ve repaired over 150 women and counting. We also donate medical equipment to fistula hospitals to support them.

RH: Movies have the ability to pass on a deep social message, but people also watch movies for their entertainment quality. Did you have to substitute one for the other in making Dry?

SL: No, I didn’t have to substitute anything, and that is why it was made into a feature film. Dry is both educative and entertaining, and that’s what makes it interesting to watch.

RH: It’s March, Women’s History Month. As women, what are some of the ways we can look out for each other?

SL: We need to support one another and be more empathic. With our combined efforts, we can create platforms to celebrate and empower ourselves. Economic empowerment and education are very important, and this cuts across all societies. Women all over the world give back to their society, so when you invest in a girl or woman, you are investing in the entire community.

Stephanie Linus’s award-winning film Dry is currently available on Amazon Prime Video. To learn more about obstetric fistula and how to support women and girls with this condition, visit the Extended Hands Foundation at www.myextendedhands.org. 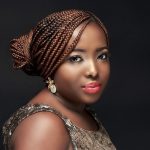 Adeola Adeyemo is a journalist and fiction writer. A new media enthusiast, she is currently studying for her Masters Degree in Journalism at Morgan State University. Adeola is passionate about stories that capture the intersection of life and culture between Africa and the entire world. Her work has appeared in publications such as the newspaper NEXT and BellaNajia.