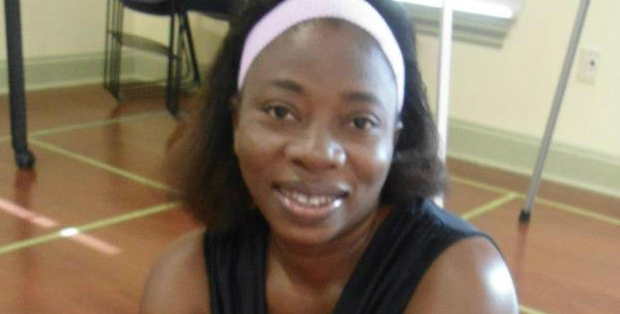 We are presenting this piece today, November 25, in recognition of the International Day for the Elimination of Violence against Women. Today also marks the beginning of the 16 Days of Activism against Gender Violence, a campaign which runs from November 25 through December 10, 2014. By educating and empowering ourselves and other women about domestic violence, we can make a difference!

Building a Network of Empowered Women

There are many things that bring smiles to forty-two-year-old Olutosin Oladosu Adebowale’s face – her children’s love, her husband’s support, her work in Ibasa, a community that can only be reached by boat in Lagos, Nigeria – but none compare with the joy she gets from empowering women. When she talks about her “sisters,” a growing network of women with whom she works, the smile on her face gets broader.

Tosin, as she is called by some, says her childhood was tough. Her father died when she was four. She was raised by her mother, whom she calls Father-Mother. She says that her mother’s experiences inspired her to be the kind of woman that she is today.

“My mother experienced different kinds of violence, from her first husband to her brothers, to her last husband. It was hectic for her; it was as if she fought a war all her life. So, each time I see a woman carrying a load, it is as if I am looking at my mother. I see my mother in every woman.” Father-Mother died October 6, 2014, but her influence on her daughter is still strong.

Olutosin’s work with women did not start immediately. She attended the University of Lagos, where she earned her English language degrees. She also married the love of her life, Adebowale. It was during the first year of their marriage that her life literally turned around.

It was April 2002. Olutosin had just given birth to her first child, Tobi. It was a tough pregnancy; she struggled with pregnancy-induced hypertension, and after the delivery, she fainted seven times. One night, when her daughter was twenty-eight days old, tired of singing to the baby and weary of carrying her when she could barely carry her own body, she asked her husband – who was watching a late night movie – to help her carry the baby so that she could get a quick nap. She got the shock of her life.

“That day Debo beat me, ehn. I thought I would die. When he first started beating me, I refused to cry. I put cloth in my mouth to choke the sobs. I did not want people to know that educated wives get beaten by their educated husbands. When the beating got terrible, I screamed. He concentrated his fist on my jaw,” she said, placing her hand on the right side of her jaw.

Olutosin’s siblings came from different parts of the country to visit her baby that week. They did not ask about her swollen jaw. When she told her elder sister about it, she was told to keep quiet – all Nigerian men beat their wives, so why did she want to make a big deal out of her experience? Her elder sister said, “You saw him, you fell in love with him and it is a Christian marriage O! For better, for worse. That is how they slap us – left, right and centre. Every woman. People don’t say it. You don’t say your own, too. You keep it to yourself. It is normal.”

“The following day after a woman is beaten by her husband is the worst day of her life. Every first day after a beating. When your husband beats you in the night and everybody helped to save you from him. The following day, it is very hard for you to come out of the room to face neighbours who rescued you from him. It takes grace. It takes courage to step out. When I came back from the hospital, it became very difficult to talk to people on the road; to greet neighbours or to even greet his siblings. It was humiliating. I don’t know how our women take it. “

After the beating, she landed in the hospital. It was the doctor’s words that set her into action. “He told me either you divorce him or you become empowered.” I said ‘Empowerment?’ He said yes. So I asked, ‘How do I become empowered?’” “Join other women that are fighting for women’s rights, to fight for your own rights. Reject what you don’t like,” the doctor said, unaware of the impact his words would have. That day when she got home, she did just that.

Her husband apologized. “He prostrated and begged me.” Then, Olutosin played her own cards. She told him that she wanted a divorce. She told him that if she continued to be beaten like that, she would soon die, and she was too young to die. That was the beginning of her journey to empowerment. As soon as she became empowered – by knowing her rights and demanding them – it became easy for her to help other women.

Olutosin says, “I always tell people that before you can run with a particular passion, it is better if you are an example. You want to, for instance, fight for the blind; your husband is not blind, your children are not blind. So, that is why I said me – I am a firsthand example of violence against women.”

Her firsthand experience is what set her on a rollercoaster of change. That was the first and last time Adebowale ever beat her. Olutosin believes that if her husband could change, any man can. But first, she says, it is important for women to add value to their lives. She has taken on the arduous job of empowering other women through the Star of Hope Transformation Centre.

Education is not empowerment

Olutosin believes that there is a connection between women and the earth: “The earth and women are the same. They are the ones that reproduce in this world. We give birth to this world, although in conjunction with men.” 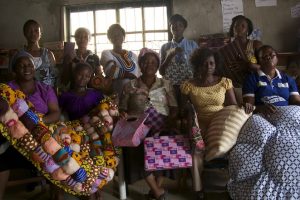 Olutosin (back row, middle) and her “sisters” at the Star of Hope Transformation Centre

She also soon discovered another similarity between women and the earth: abuse. “The way we bastardise our environment is the way we bastardise women. Trash is useless, you kick it away. Some men treat their women like trash – that’s why they kick them, anyhow. When the earth is sick, every one of us is sick. If a woman is sick, the whole world is sick.” This is why she works with women. “When you work with women, you have healthy women, you have healthy communities and you have peace. I said okay, I will marry the two together. When a woman becomes empowered, she is no longer trash. She has an added value.”

Adding treasure, one woman at a time

Besides educating women about their rights, Olutosin also works toward empowering them economically. She does this with her “Trash to Treasure” work. She takes women with stories – from the Ibasa Community, especially – and empowers them, adding treasure to their lives.

Olutosin says that she chose Ibasa for special reasons. “In the community, there is no road, no secondary school, no electricity, no petrol station, no health centre and no police station. There are about ten thousand people living in the community.” She says that to the best of her knowledge, there are no other NGOs working in that community. “I like going to places no one is going,” she says. 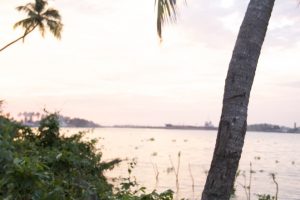 The selected women go through different stages of the Transformation Curriculum, which many of them say has changed their lives. The curriculum includes Healing and Gender, in which the women share their experiences; Creativity, where they look deep within themselves for what they can create; Independent Production, in which they produce their own works; and Monitoring and Evaluation, where the impact of the project is evaluated.

Iya Ibadan lost her husband thirty years ago and has been living with her sister. She completed the Centre of Hope Transformation Centre’s curriculum, and although she has had no formal education, she says that if she hears that her son beats his wife, he will not hear the last of it. In her native Yoruba language, she says, “There is no reason for any man to beat a woman.” 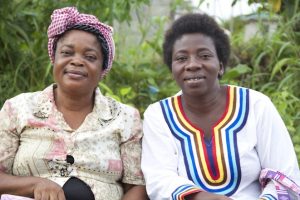 Janet Emmanuel Frank was sexually abused as a child. Last year, her husband started beating her. The unemployed mother of one said that with the skills that she has gathered at the Centre, she can now start something for herself with the right support. “I now make Ankara bags, Ankara sandals, Ankara anything. Just tell me what you want, I will make it.” She says that she reported her husband to their pastor, who called him to order. He no longer beats her. 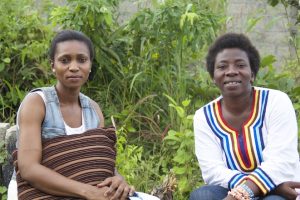 There are more women like Janet and Iya whose lives have been transformed by the Centre and by the connection of sisters around the world, with Olutosin at the centre.

Saving the environment, one trash at a time

In 2014, twenty-seven women underwent training in how to use different kinds of trash to make treasures as part of adding value to their own lives. The women collect materials that would have otherwise ended in the tailor’s dustbin and make beautiful things from them, including notebook covers, shoes, slippers, hair ruffles, cloth clips, throw pillows and more. From Styrofoam, the white foam padding material for electronics, the women make laptop bags, cooking bags, and mobile phone pouches. And with sawdust, they make wall clocks, trays and slippers soles. The women also make the environmentally friendly Wonderbag, a non-electric slow cooker, which the Nigerian government adopted for its National Clean Cooking Scheme but recently outsourced manufacturing to a foreign company. 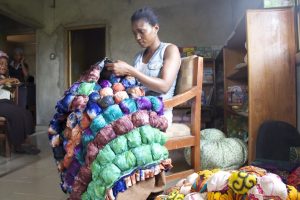 Janet making treasure out of trash

The idea of trash-to-treasure also encourages the women to see trash in a new light, and Olutosin points out that the program is eco-friendly. “When Styrofoam is burnt, it releases dangerous gases into the air. Even when not burnt, to discard it as waste is not easy.” She says that the work also helps the women to be inventive: “Before you discard anything, you think, ‘What else can it be used for?’”

Building a strong network of women

Olutosin says she has sisters in many different parts of the world. These sisters have been the funders of most of her projects. One of them is Funmi Iyanda, whose Change-A-Life organisation provides yearly grants to allow women to set up their own businesses.

Olutosin uses social media to connect with many of these sisters. On November 11, 2014, she dedicated a Facebook post to one sister who is helping a girl raise funds for transportation so that she can go to school. Social media has also been a useful tool in creating a market for the finished works made by women from the Centre. With her work, she has been able to connect women in need with other women who may be able to provide solutions.

RELATED: Anything But Ordinary – Radiant Health Women of Action