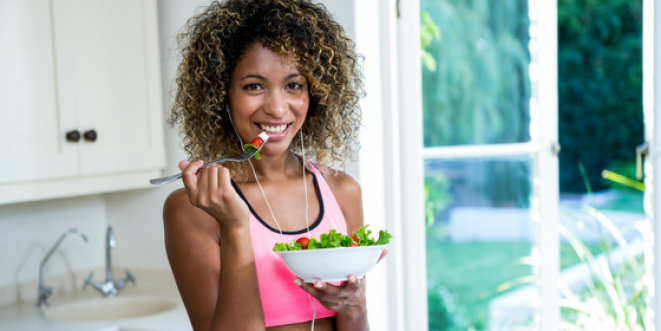 Music is one of the great joys of life. And streaming services and digital assistants have made access to the perfect playlist to match your mood or activity just a voice command away. Music has already been shown to have an effect on exercise and endurance. A recent study has found an interesting link between volume of music and healthy food choices.

Swedish researchers set up an experiment in a Stockholm café. They played various genres of music at both 55 decibels and 70 decibels. Over several hours across multiple days, researchers found 20% more patrons ordered something unhealthy when exposed to louder music when compared to those who ordered during a quieter time. It is theorised that the softer music has a calming effect, making us more mindful of our choices. This was a small study, and the results have yet to be confirmed by similar research. But in the meantime, try why not try it out for yourself? Find a soothing playlist and listen to it during the mid-afternoon slump or any time that your willpower tends to be low.

Physical activity and exercise have a well-known long list of benefits, including improved health, strength, and range of motion. Exercise has been shown to reduce stress, improve mood, and enhance cognition. Now recent studies suggest that it may have an impact on personality. While previous research found a correlation between a sedentary lifestyle and declines in positive character traits, a recent study used a larger population sample and a more extended follow-up period to confirm those results. French researchers analysed data from two large, survey-based studies that measured personality traits, exercise habits, and general health. The initial survey was done in the 1990s, and nearly 20 years later, over 9,000 participants retook the same studies. The researchers found that the subjects who reported being less active overall had reductions in conscientiousness, openness, agreeableness, and extraversion – even after accounting for differences in baseline personality and health measures.

The changes in the personality traits over time were small, but the link with exercise was relatively strong. As always, correlations do not prove causation – especially in an observational study like this. Further research is needed, especially with samples from different population groups and using more objective measures of physical activity. However, this and other similar studies challenge the long-held belief that your personality is fixed over the course of your life. Plus, you can use the goal of maintaining your awesome personality as another reason to not skip your daily workout.

According to the Migraine Trust, migraine is more common than diabetes, epilepsy and asthma combined – with an estimated global prevalence of 14.7% or 1 in 7 people. Migraine headaches affect three times as many women as men. Women also don’t generally respond as well to current drug treatments. Despite this imbalance, the majority of migraine research is done with male lab animals. While it is generally assumed that fluctuating estrogen levels were linked to the higher incidence of migraines in women, the actual cause and effect of this link were unknown. However, a recent study might have provided a piece of the puzzle.

The study was one of the first to research the role of a specific protein known as NHE1 in migraine headaches. This protein regulates the transport of protons and sodium ions across cell membranes in the brain. When it isn’t present at high enough levels, it can increase pain signalling that leads to a migraine.  After examining both male and female rats, researchers found that male rats had four times the amount of NHE1 than female rats. Furthermore, they found the lowest levels of NHE1 were found in the female rats with the highest estrogen levels. These results, if confirmed, may lead to more focused research and new treatments.

A ten-year clinical trial following over 10,000 breast cancer patients in six countries found that most women – a staggering 70% -with the most common type of breast cancer did not benefit from chemotherapy after surgery. This means that more women will be able to forgo the side effects of this aggressive treatment without impacting their results. This study, considered the largest breast cancer treatment trial ever conducted, is part of a general trend away from chemotherapy in favour of patient-specific gene-targeting therapies.

In other cancer news, the Global Burden of Disease (GBD) research consortium recently released updated cancer data for 195 countries and territories. In 2016, there were 17.2 million cancer cases worldwide, an increase of 28% over the past year. While lifestyle-related cancers, such as lung, colorectal and skin cancer, saw an increase from 2006 to 2016, several cancers from infectious causes, like cervical and stomach cancers decreased over the same time period.

How about some good news? Italian scientists and chefs have created a healthy cancer-preventing pizza that is also good for reducing the risk of heart disease. Topped by healthy vegetables and olive oil, the Pizza Pascalina can be eaten twice a week guilt-free!

More Kids Means You Need More Time for Yourself

Any mum with a growing family will tell you that she just doesn’t have time for herself. As it turns out, however, the more kids a woman has, the more time she probably needs to spend caring for her own health. Researchers at the University of Cambridge have found that women with more than two children have a 40% increased risk of a heart attack – and at younger ages than you might expect.

After analysing data from more than 8000 white and black women in the US, the research team found that that five or more children increases the risk for heart disease by at least 30%, while her stoke risk increases by 25% and heart failure risk grows by 17%. It’s believed that the strain pregnancy and delivery places on the heart is a leading cause for these increases, though it goes hand-in-hand with the amount of self-care busy mums allow themselves. While the stats are a little staggering, the lead researchers stress that they don’t want to panic anyone; their goal is to encourage mums with more than two children to keep an eye on their heart health and to prioritise themselves first – like putting on your oxygen mask before assisting children with theirs.