Emelyne Museaux: Life Under the Shadow of Pain

By AdeOla Fadumiye
Shares
b
0
d

This is part of our Woman Interrupted series for Radiant Issue No.11, The Survivor Issue. Out now at newsstands worldwide.

One rule dominates the road at intersections: stop. Cars and pedestrians move to the rhythms of the red-light signal, the stop sign, and the unspoken rules of the four-way intersection. For the most part, we obey them. But not all intersections occur on roads, and in the world of chronic disease, pain, and illness, the rules do not apply.

Emelyne Museaux knows this well. In her life, chronic fatigue and back pain from sacroiliac joint dysfunction (SIJD) collided with dysthymia (chronic depression) and anxiety, and she has been living at the scene of that wreck for 11 years.

The depression started in childhood; Emelyne has been aware of it since she was 11 years old. Her back pain presented as recurring pain when she was 21, after she unknowingly injured herself bussing tables a year earlier while working at a restaurant. The constant bending and heavy lifting caused a repetitive strain injury to her sacroiliac (SI) joint.

“At 22, the pain disappeared and did not reappear until I turned 24,” explains Emelyne. “I was at my healthiest and fittest, and I was doing a lot of exercises that were helping to strengthen my core and stabilize my back and pelvic area, though I wasn’t aware of that.”

Then at 26, while she was working in retail and standing on her feet for eight-plus hours a day, the pain became chronic, and she was diagnosed with SIJD 20 months later. And though Emelyne was high-functioning and her depression had never been debilitating, the constant physical pain fed her dysthymia.

“Some days are a win, and I can get out of bed, take a shower, and get to work,” she says. “Other days I can barely manage a shower or remember to eat, not even because of the pain, but because the depression gets really bad.”

At one point during the ordeal, the inflammation of her SI joint reached the dermal level. Her skin became inflamed, and there were periods where she couldn’t wear certain clothing because it hurt when the fabric touched her lower back.

In Search of Answers

The journey to diagnosis wasn’t painless either. It was a back and forth cycle of being in and out of the healthcare system.

“I saw a lot of doctors and specialists, including an orthopedic specialist, chiropractor, acupuncturist, pain management specialist, an osteopathic doctor, massage therapist, podiatrist, rheumatologist, and a physiatrist,” recounts Emelyne.

She got MRIs, bone density tests, and three different sets of injections: cortisone injections, radiofrequency ablation, and a lumbar root nerve block, all to no avail. It took eight years from when her back pain symptoms started and 20 months after they became chronic for Emelyne to get a diagnosis.

“I was repeatedly prescribed pain medication,” she says. “It was the first thing many of the doctors did. I’ve been on about 18 different medications, but the pills weren’t addressing my pain. To add insult to injury, a nurse accused me of drug abuse.”

Ultimately, Emelyne was not interested in masking the pain. “I wanted to know what was wrong with me, but everybody passed me down to the doctor they thought could help me when they realized they couldn’t diagnose me.”

Her physiatrist, the only black doctor she saw, finally diagnosed her with SIJD, confirming Emelyne’s own self-diagnosis. “I visited online forums and read medical journals, and they all pointed to the same thing. My symptoms were glaringly obvious, but the doctors were more interested in throwing drugs at me.”

She was almost 28, out of work and out of savings.

Taking It Day by Day

Emelyne wasn’t able to go back to work due to the pain, but she needed stable employment. She wasn’t eligible for disability benefits, and Supplemental Security Income (SSI) required that she live well below the poverty line, which was not her situation either. She was finally able to secure a mishmash of flexible freelance work projects, including writing and copyediting.

“My jobs give me the freedom to work at home, to work my own schedule, and to travel when I want. Ironically enough, it is the first time I’ve ever had freedom in a job,” notes Emelyne.

Almost six years after her diagnosis, Emelyne does daily physical therapy exercises to help strengthen her pelvis, but she is always in pain, and the pain level fluctuates.

“Exercise is tricky because I never know how much is too much,” she admits. “I go for a walk every day, and that’s honestly more for my mental health than for my SI.”

She also eats and cooks with inflammation-reducing foods such as tart cherry juice and turmeric, and she recently started a naproxen regimen.

“A doctor told me to take something as soon as I wake up and then every 8 to 12 hours, because I have chronic pain due to an inflammatory condition and an injury, and I shouldn’t wait until the inflammation is too strong before I take something,” she explains.

“As a black woman, I understood that my pain would be invalidated, because some medical professionals surely believe that black people feel less pain, and women are usually thought to be exaggerating their pain levels,” says Emelyne. “I had to be my own health advocate.”

Radiant Health: So what kind of support did you use during your experience?

EM: I leaned on my friends for emotional support, but you can’t expect the same things from everyone. I have family members who don’t ask about it because they don’t know how to approach it, and that’s fine. They’re always very considerate of my pain when doing certain things.

I get a lot of fulfillment from my work. It makes me very happy that I am still financially independent and I don’t have debt despite this.

Having a set of friends who you can lean on and can talk to, not just about these problems but about my emotions, is everything. Any emotional pain you feel when you’re living with chronic physical pain will be intensified, and one is going to feed into the other.

RH: What advice, if any, did anyone offer you? Did that advice prove useful or did it further aggravate your situation?

EM: Pretty much all the advice I got was terrible, and this is a reality for people with chronic pain. People tell you, “Do this exercise. Do this stretch. See this doctor. Do this massage. Take this pill. Get X amount of rest.” They were throwing things out from a lower back pain issue a family member or a friend had had, but lower back pains are not created equal. They don’t all have the same root.

If I had taken some of the advice, it would have made me worse. Some of the advice that I did take was useless. People are going to give unsolicited advice and probably tell you to pray the problem away, especially if it is mental health related.

RH: In hindsight, what advice would you have given yourself?

EM: I would do everything I was doing between ages 22 to 23 when the recurring pain wasn’t an issue. The exercises I was doing were actually stabilizing my pelvis and strengthening my core and low back. I would go for walks, and I’d keep the area lubricated and blood circulating.

RH: How have you grown and what have you learned from this experience?

EM: I’ve always been an introvert, but I’m also a social person. SIJD forced me to spend time with myself, and in spending time alone, I learned myself. It opened me up to a new level of self-awareness, and I was forced to tackle my flaws. It also made me more reflective and has helped me to focus on my priorities. As someone who was officially diagnosed with depression and attention deficit hyperactivity disorder (ADHD) after being diagnosed with SIJD, my biggest takeaway medically is you have to be your own health advocate, you have to do your own homework, and you have to speak up for yourself. You might be the only one in your corner. 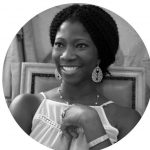 AdeOla Fadumiye is a writer, editor and the creator of Pearls from our Fathers. She writes at the intersection of faith, entrepreneurship, feminism, culture, race, and inequality. Find additional clips of AdeOla's writing at www.adeolafadumiye.com.