Breast Cancer Screenings: Not All Women Are White 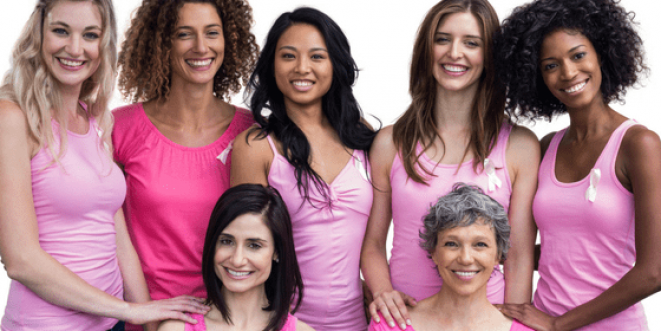 Breast Cancer Screenings: Not All Women Are White

With higher budgets, huge numbers of health studies and research projects are done in the US and Western Europe. And, many of the test subjects fall under the Caucasian category – although findings are supposed to translate across races. According to a research letter published last week in the Journal of the American Medical Association Surgery, this fallacy contributes to underscreening and delayed diagnosis for black, Asian, and Hispanic women when it comes to breast cancer.

A study undertaken by researchers at Massachusetts General Hospital found that the United States Preventative Services Task Force recommendations which suggest breast cancer screenings should begin at age 50, really only apply to white women. Black and Asian women should begin at age 47 and Hispanic women should start a year before that. If you can, try to schedule your first screening at the correct age for you, even if medical professionals believe you should wait a few years.

And, while we’re on the subject of breasts, a sports bra manufacturer and researchers from the University of Portsmouth have found that 44 percent of women who regularly exercise skip the sports bra. This could lead to problems when working out as your breasts can jiggle as much as 14 cm during a workout, loosening the tissues which can’t be repaired and will lead to sagging breasts later on. Do yourself a favour and get a sports bra that fits; it’s one of the few wardrobe splurges you can justify as being good for your health.

Knit for Peace… and Better Health

Numerous studies have found that knitting can reduce depression and anxiety, maintain cognitive health, and help people manage chronic pain. These studies have been collected and summarised in a new report, published by “Knit for Peace” a UK-based knitting network, which also includes the results of the group’s recent member survey.

One of the studies cited in the report is a 2007 study done by the Harvard Medical School’s Mind and Body Institute that found that knitting lowers heart rate by an average of 11 beats per minute, creating a sense of calm that rivalled the effects often found in yoga. In a 2011 study conducted by the Mayo Clinic, people aged 70 years or more who knit had a reduced risk of developing cognitive impairment and memory loss, while those who engaged in reading or music as their primary hobby did not have the same benefits. And in the results of the Knit for Peace member survey, over 21 percent of members indicated that knitting helps relieve the pain of arthritis. It is theorised that the repetitive movements release serotonin which can improve mood and dull pain.

If you aren’t already knitting for health or any other reasons, now is as good a time as any to get started. Researchers at Carnegie Mellon University’s Textile Labs have developed software that can scan any 3D object and deliver a knitting pattern.

A recent study adds to the growing body of knowledge of how social isolation impacts health. Researchers from the University of Michigan Kellogg Eye Center found that older people with very few family members or friends were 40 percent less likely to opt for cataract surgery. Older adults with three or more family members, especially adult children, were more likely to pursue the procedure.  Researchers theorise that family members and friends encourage older adults to take care of their fading vision, and can more easily facilitate the necessary transportation and support needed after the surgery.

Cataract surgery is one of the most common operations performed in the United States and the UK.  Recent research shows that a successful procedure can reduce the risk of falls, slow cognitive decline and improve overall quality and length of life.  Interested in preventing cataracts in the first place?  A diet high in antioxidants as well as wearing sunglasses and wide-brimmed hats to protect eyes from UV radiation may reduce the risk.

Don’t forget about your vitamin D levels! Vitamin D is an essential vitamin, involved in protecting bone health, immune system functioning, neuronal communication and muscle function. A primary source of vitamin D is sunlight. However, it’s often recommended to limit exposure to direct sunlight to lower the risk for skin cancer and cataracts. Fortunately, we can also get vitamin D from foods like fatty fish (like salmon and tuna) as well as from specifically fortified foods like milk, orange juice, and breakfast cereals. It is also found in dietary and calcium supplements. Studies have found that diet, supplements and protected sun exposure will give you all the vitamin D you need. And that’s a good thing; observational research continues to indicate the protective and preventive benefits of vitamin D.

A recent study by the National Cancer Center in Japan found that participants with higher levels of vitamin D had a 20 percent lower risk of cancer overall when compared to participants with the lowest levels  – even after accounting for age, weight, physical activity, smoking habits, and alcohol intake. Previous research had indicated a link between vitamin D levels and cancer risk, however, most of those studies focused on white populations only. As race, skin colour, and ethnicity impacts production and metabolism of vitamin D, similar research for non-Caucasian populations are needed.

Diabetes has traditionally been divided two groups, currently known as type 1 and type 2. But Scandinavian researchers suggest that that classification should be updated. By dividing current type 2 patients into four different groups, they argue that medical personnel could give more effective and individualised care. These groups would be organised based on specific characteristics such as the patient’s age at diagnosis, as well as their risk for complications like kidney disease and vision loss. This theory has garnered positive reviews for its emphasis on bringing personalised care to diabetes treatment. However, critics note that the sample set of 9000 Swedish diabetic patients is not diverse enough to make universal recommendations and that the suggested classifications might ignore those with lower medical risks.

In other diabetic research news, researchers have found that a vegan or vegetarian diet beneficial in slowing down the progression of type 2 diabetes, that exercise can prolong the “honeymoon period” for patients diagnosed with type 1 diabetes and that the Apple watch can predict diabetes with 85 percent accuracy.

The benefits of exercise for improving heart health are already well-documented and well-publicised. However, a recent study is one of the first to focus on specific details of walking by women over 50. Researchers found that walking for at least 40 minutes, several times a week at an average to fast pace correlated with a near 25 percent drop in the risk of heart failure among post-menopausal women. The benefit occurs regardless of body weight or the use of other forms of exercise besides walking.

By analysing data from the Women’s Health Initiative, this study was able to parse details on walking behaviour and health outcomes for over 89,000 women for more than ten years. As the results were consistent across different age categories, ethnicities and starting body weight, the authors believe the findings can be applied to most women over 50 years old. The results also indicate that walking frequency, duration and speed each contribute equally to the overall gain. Women who walked at least twice a week had a 20- 25 percent lower risk of heart failure than those who walked less often. Those who walked for 40 minutes had less risk than those taking shorter walks, and those who used a fast pace showed a 38 percent lower risk when compared to women who walked at a more casual pace. In a related study, researchers found that stair climbing by post-menopausal women had similar benefits in improved heart health.