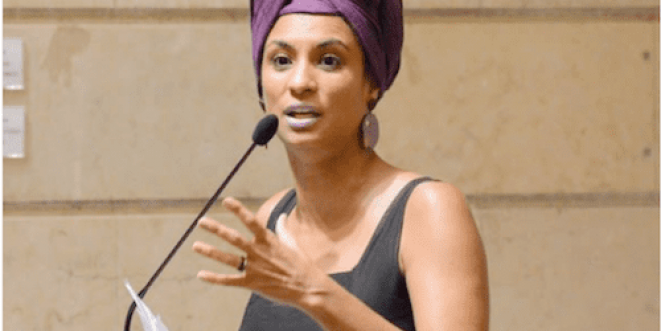 No matter where you live in the world, it’s tough to be a black woman. In Africa, the state of healthcare combined with gender violence across much of the continent makes it frightful, and in the USA, constant racism leads to unbelievable maternal and infant mortality rates. And in Brazil, a country where blacks are over 50 percent of the population, it’s still the women who suffer disproportionately. There too, black women constantly battle a combination of racism and gender violence.

So, when someone like Marielle Franco, a black woman from a favela (as slums and informal settlements are known in Brazil) rises to the position of councilwoman in politics and continues to draw attention and highlight the issues central to her constituents, she becomes a problem for the establishment. Shot to death on 14 March after leaving an event supporting black women’s initiatives (with four shots to the head), it’s believed Marielle was assassinated because she called out against a brutal police unit for the death of a young man leaving a church. Her sister believes she was a menace in the face of racist, sexist, business as usual policies.

In Rio, and major cities across the world, protests and marches are taking place in solidarity. And you can show yours by using the #MariellePresente hashtag across social media – and by getting involved with activist groups in your local communities.

You don’t need a Surgeon General’s warning to know how hazardous smoking can be to your health, especially as it relates to cardiovascular health and cancer prevention. Perhaps less well-known is the link between smoking and hearing loss. A study published in the Journal of American Medical Association in 1998 found that smokers were nearly 70 percent more likely than non-smokers to suffer hearing loss. The study also found that non-smokers living with a smoker also had an increased risk of developing hearing loss compared to those not exposed at all.

These findings were confirmed and expanded upon in a new study published this month and published by Oxford University Press. Researchers analyzed data from annual health check-ups for over 50,000 participants and tracked them over an 8 year period. Even after adjusting for other causes (like age and occupational noise exposure), the researchers found smokers were 1.2 to 1.6 times more likely to suffer hearing loss when compared with people who never smoked. The good news is that researchers also found that the risk of hearing loss decreased within five years of quitting smoking.

Interested in quitting? Another recent study found that while the use of pharmaceutical aids to quit smoking (e.g. drugs, nicotine gum or patch) shows promise in clinical studies, they are not an effective cessation method in real life. E-cigarettes are not useful for quitting either. Best method? Some argue that going cold turkey is still the best way.

During menopause, women often suffer a reduction of bone and muscle mass. This contributes to an increased risk of osteoporosis, broken bones, higher death rates and a lower quality of life. A recent study from Brazil has found that the Mediterranean diet might be useful in preventing the loss of bone and muscle mass in postmenopausal women. After studying the bone density, muscle mass, and dietary habits of over 100 women who had gone through menopause an average of 5.5 years earlier, researchers found a higher bone and muscle mass in the women who adhered to a Mediterranean diet than those who did not. The link between diet and bone/muscle health appeared regardless of whether or not the women had previously used hormone therapy, their prior smoking behaviour, or their current level of physical activity.

The Mediterranean Diet, based on the traditional ingredients and cooking styles of countries surrounding the Mediterranean Sea, emphasizes a high intake of fruits and vegetables, grains, potatoes, olive oil, and legumes along with moderate consumption of fish and red wine. The Mediterranean diet has been linked to a lower risk of heart disease, diabetes, cancer and other diseases; but this is one of the first studies to examine its effects on body composition specifically after menopause. A similar study found that an overall healthy diet – focused on fruits, vegetables, whole grains, low-fat dairy and other healthy foods — reduced the risk of hip fractures in women over 50 by 13 percent.

Exercise for an Easier Pregnancy

New research reveals that exercise during pregnancy can reduce time spent in labour. For this study researchers divided over 500 healthy women into two groups – an exercise group and a control group. Those in the exercise group followed a weekly regimen of jogging, weight training and pelvic floor exercises that added up to three hours a week.  The group of women who exercised had an average labour that was 50 minutes shorter than those who didn’t. The women in the exercising group were also less likely to use an epidural during childbirth.

Improved physical fitness for expectant mothers can do more than provide a smoother delivery; it can save lives. Maternal mortality rates in the United States have actually increased in recent years – at a time when most nations worldwide have succeeded in reducing the number of women dying from pregnancy or childbirth complications – even in Nigeria, where rates are untenably high. A recent World Health Organization report states that between 1990 and 2013, the maternal mortality ration for the USA more than doubled – and the CDC reports that the risk of pregnancy-related deaths for black women is 3-4 times higher than for white women. Cardiovascular disease is a leading cause of childbirth complications and most obstetricians would recommend adopting an active lifestyle before, during and after pregnancy to prevent these complications.

Earlier this month, Fitbit released Versa, a $200 Smartwatch for all featuring a 24/7 heart rate and activity monitor, sleep tracking, space for 300 songs, and menstrual cycle tracking. Fitbit also released Ace – the first Fitbit for children age 8 and up. And every week, new activity trackers, fitness apps, and wearable tech are made available. Naturally, consumer and medical research are following closely behind. According to survey results released by Accenture, wearable device usage has almost quadrupled in the past four years, up from 9 percent in 2014 to 33 percent in 2018. Seventy-five percent of consumers view wearables as beneficial to understanding their health condition, and 90 percent of consumers said they are willing to share their wearable health device data with their physician. They are less willing to share that data with their insurance company (63%), government agency (41%) or employer (38%). Usage of mobile apps and telemedicine is also increasing.

Recent studies suggest that wearable activity trackers can be used to more accurately diagnose health issues or improve long-term adoption of an active lifestyle. In one study, activity tracker data was used to differentiate between patients who have an enlarged heart due to exercises from those with enlarged hearts due to underlying health problems. Another study found that participants who received physical fitness advice in addition to pedometers to track their steps were still more active four years later. And earlier this year, the app Cardiogram reported that heart rate sensors like those found in Apple Watches and Fitbits could distinguish, with 85 percent accuracy, between people with or without diabetes. Remember though, they aren’t right for everyone; if you’re happy without it, but still make healthy choices and see your doctor regularly, you can probably get by without one; it’s up to you.