Bring Back Butter: Study Reveals It’s Not the Bad Guy After All 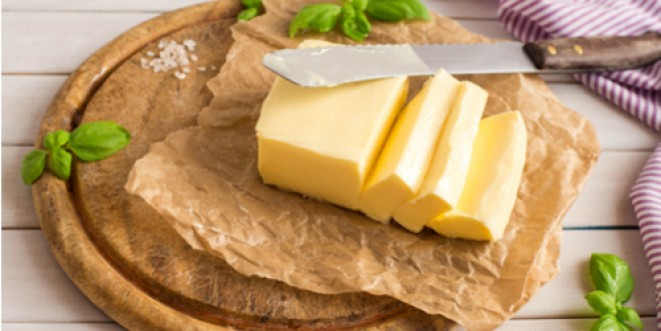 Since a diet high in saturated fat can increase the risk of heart disease and stroke, many of us have made the switch to margarine, low-fat yogurt and other substitutes for full-fat dairy products. However, results from a recent study from the US National Institutes of Health has contributed to a growing body of evidence that dairy fat may not be as detrimental as previously assumed.

For this study, nearly 3,000 adults age 65 years and older were tracked over a 22-year period. Participant’s blood plasma levels of three different fatty acids found in dairy products were measured at various intervals during the study.  At the end of the study period, none of the dairy fatty acids was associated with total mortality. In fact, one type was associated with a 42% lower risk of dying from stroke. These results, combined with the news that chocolate milk may be the best sports recovery drink, suggest that we reconsider our dairy choices. If you are watching your weight, you still may need to consider portion sizes; but you no longer need to feel guilty for using actual butter or savouring a rich milkshake.  Enjoy!

Better Sleep for Everyone

Want to sleep better? The findings of a recent study from the University of Melbourne might make for interesting bedtime reading. Researchers merged data from the UN’s gender empowerment index with the sleep quality reports from the European Social Survey. After analysing data from more than 14,000 people in 23 European countries; the researchers concluded that couples who live in countries with more gender equality are likely to sleep better.

Study authors did not find a scientific explanation for the link but hypothesize that gender differences in society might point to an explanation. They found that women’s sleep was more likely disrupted by children and family activities while men’s sleep was most often impacted by financial worries. When both family obligations and financial concerns are more evenly distributed, everyone can enjoy reduced stress and better quality of sleep.

The connection between improved learning and exercise just got a little closer. A recent study found that a single fifteen-minute session of cardiovascular exercise improved the retention of a new motor skill. Study participants were asked to play a “muscular video game” where a pressure sensitive joystick was used to move a cursor around on a computer screen based upon the strength of the grip.  A session of this game was followed by 15 minutes of exercise or 15 minutes of rest. After a few more practice sessions, the participants were tested again at 8 and 24 hours after the initial test. By monitoring the brain activity of the different groups, researchers found that those who had exercised for a mere 15 minutes were able to better perform the new skill and with more efficient brain activity.

The study results also shine a light on the role of sleep in learning new skills. The differences between the different test groups did not become apparent until the 24-hour mark; suggesting that efficient brain activity is the result of both exercise and sleep. These findings echo several earlier studies that connected exercise and sleep with improved learning and memory retention. While it is hoped these discoveries will prove useful for patients recovering motor skills after a stroke or injury, they can also be a reminder for all students to take study breaks, take some exercise and get a good night’s rest.

Improved sleep for babies and parents

New mothers are generally advised to wait six months before introducing solid food to their babies. However, results of a new study suggest starting 3 months earlier may have benefits for both children and their parents. The Enquiring About Tolerance (EAT) study involved over 1300 women from England and Wales who were randomly divided into two groups. Members of the first group were encouraged to exclusively breastfeed for around six months; members of the second group were asked to introduce solid foods at the three-month mark while also continuing to breastfeed. Participants also filled out online questionnaires about food consumption, sleep duration, and maternal quality of life. The researchers found that infants in the group which included solid food earlier slept longer and woke less frequently than infants in the traditional group. The average increase in sleep duration was about a quarter of an hour – almost two hours longer per week. No surprise that extra sleep for both mom and baby improved maternal happiness and quality of life.

Still, the study authors encourage all women to continue to follow the advice of their healthcare professionals. Introducing solid food too early does have risks including upset stomach and choking. Babies need to develop the coordination to move solid food to the back of the mouth for swallowing, and children will gain this skill, and many others, on their own individual timetable.

We all know we should exercise, get proper sleep, eat a nutritious diet, and develop positive responses to the stressors in our lives. Not only does this healthy lifestyle reduce the risk of premature death and disease in the future – it just feels good right now. Scientists have confirmed another activity that reduces future risks and feels great today: spending time in nature.

For this study, researchers reviewed the results from over 140 previous reports, ultimately including data for more than 290 million people in 20 countries. The combined results point towards a definite health boost enjoyed by people who have the most access to nature and green spaces. Bottom line: people who spend significant amounts of time in nature have reduced risks of type II diabetes, cardiovascular disease, preterm birth, and premature death.  Despite the large amounts of data involved in this study, the authors were unable to definitively explain why this happens. Until they do, you can consider access to nature when deciding where to live, work, and play… or at least how you will spend this afternoon.