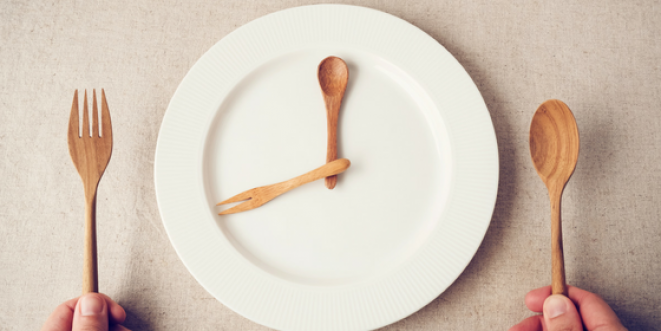 Sorry (Not Sorry), the Kitchen’s Closed

A popular new diet has been making the rounds on talk shows and women’s magazines – the 16/8 diet. For this programme, adherents eat all of their meals in an eight-hour window each day and then fast for the remaining sixteen hours. One of the first scientific studies of the 16:8 diet was recently published and the results seem promising. When compared to a control group, the participants who followed the 16:8 plan for twelve weeks lost about 3% of their body weight and saw a drop in blood pressure as well. While this was a small study (only 23 participants), these early results are in line with those from other recent studies of intermittent fasting.

Virtually all weight-loss diets are based on some form of calorie-reduction – whether through calorie counting, portion control, or eliminating specific types of food – and this one is no different. By compressing all calorie intake to an eight-hour window, the researchers found that the participants consumed, on average, 350 fewer calories each day. The true benefit of this plan is that it can make the calorie reduction as simple as knowing what time it is, all without the need for tracking every bite you eat. So if closing your kitchen early will help you eat less overall, consider this a tool you can use to enjoy a healthy diet.

Know the Risks, See the Signs

The Heart and Stroke Foundation of Canada recently released a report on the impact stroke has on women and the news is not good. More women die from stroke than men.  Women who are living with stroke are less likely to participate in rehabilitation and regain their independence and are more likely to end up in long-term care. And despite that fact that pregnancy, menopause, and hormone replacement therapy are all risk factors for stroke, women are still underrepresented in research studies concerning stroke prevention and therapy.

Perhaps the most sobering fact from this report is that 70% of the women surveyed did not know any of the main risk factors and 36% couldn’t name any of the signs of a possible stroke. While this report was only meant to measure the current Canadian population, similar statistics and conclusions have been found in the US, the UK, and worldwide. The good news is that 80% of strokes are preventable. While age is certainly a factor, women (and men) can have strokes as young as 30 or 40 years old. So everyone can benefit from being more aware of the risks and signs of stroke. Why not take some time for a quick review and share the information with friends and family?

Early to Bed, Early To Rise

Several research studies have identified the potential benefits of being an “early bird” as opposed to being a “night owl’. According to these studies, early risers are more likely to make healthier food choices, be better drivers, and get better grades. Night owls, however, have the benefit of a larger social network (Party on!).

A recently published study examined the link between preferred chronotype and depression. This is not the first time this link has been explored; previous studies have concluded that night owls are twice as likely to suffer from depression. For this new study, data from over 32,000 women (from the Nurses’ Health Study) was tracked for over four years.  Even after adjusting for factors such as physical fitness and activity, chronic disease, and work schedules, the researchers found that early risers still had a 12 to 27% less chance of becoming depressed when compared to intermediate or late night types. Overall, the study authors conclude that preferred chronotype may have a small effect on depression risk, but it is not as large an impact as previously thought. Basic common sense advice – such as getting enough sleep, taking exercise, spending time outdoors, and dimming lights at night – can help everyone feel better regardless of when they get to bed.

Now for the bad news. Despite these advances, the World Health Organisation (WHO) estimates that over one million women worldwide are currently living with cervical cancer. Poor access to vaccinations, screening, and treatment in low- and middle-income countries has resulted in unchanged (or rising) cervical cancer mortality rates in those areas. Recently, the WHO has committed resources to reduce cervical cancer worldwide. But to end with some good news, American researchers at the University of Arizona have found a link between the presence of a certain “bad” bacteria, Sneathia, and an increase of HPV infections. While more research is needed, this discovery may help scientists explain why some women can fight off HPV infections and why other infections lead to cancer. Ultimately, this may lead to an even further reduction of the incidence and mortality of cervical cancer worldwide. And that would be good news.

To Err Is Human, to Republish Is the Scientific Way

The Mediterranean Diet has been the subject of numerous studies with the general consensus being that it is one of the healthiest diets in the world. But a landmark study on the Mediterranean Diet recently made headlines again when the New England Journal of Medicine retracted and republished the results. The original study followed over 7,000 participants in Spain and found that the traditional Mediterranean diet of fish, vegetables, olive oil, and nuts could reduce the risk of heart disease by 30%. As part of an independent review of thousands of studies from 2000 through 2015, a researcher found that one of the sites used in the Mediterranean study did not follow proper procedures; they allowed spouses of study participants to join the study as well. This means the group assignments were not truly random, compromising the validity of the results. The original study authors were able to re-analyse the results without the questionable data and found the results to be the same. The New England Journal is republishing the updated results.

The rigorous review followed by a retraction and republication of results can be seen as comforting. Scholarly journals, such as the New England Journal of Medicine, are thorough and careful with the information they provide. And, according to Retraction Watch, a website that tracks errors in science journals, less than a tenth of a per cent of published studies are retracted each year. Still, this can be a reminder to always use common sense and self-awareness before applying any study results to your own life.