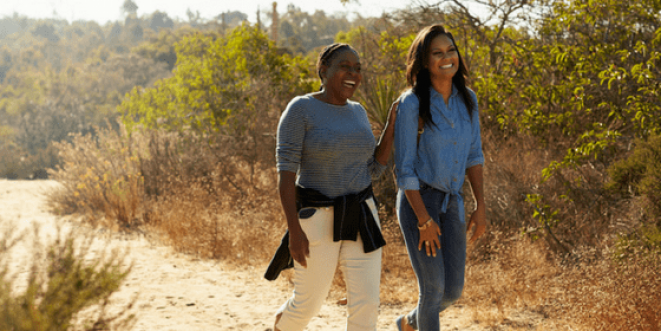 The tragic, early death of 27-year-old civil-rights activist Erica Garner has reminded many of the well-documented disparities in American health.  African Americans, especially women, have higher rates of illness and disease including heart disease, diabetes, Alzheimer’s, and mental health issues.  Nearly half (48%) of black women over the age 20 have hypertension.  Many believe this disparity can be explained by the demanding expectations made of black women in America.  To simultaneously contend with both racist and sexist environments, while continuing to put the needs of others first (an issue sometimes known as weathering) – it is theorised – leads to increased and earlier health problems for black women.

The nonprofit, GirlTrek, founded in 2011, was created to tackle this problem by addressing not only the health issues of African American women, but also acknowledging the stressors and traumas that trigger or aggravate them.  Members and volunteers pledge to walk their neighbourhoods every Saturday for at least 30 minutes and encourage others to do the same. GirlTrek founders, T. Morgan Dixon and Vanessa Garrison, recognise walking as practical and accessible first step to improving health that also has a deep connection to African and African American history. The Underground Railroad, the Montgomery Bus Boycott and the March on Washington, are all examples of black women coming together to walk and create change. And, anyone who’s ever spent time in an African village knows only too well that walking is still the only real option for millions across the world. Maybe it’s time to get back to your roots – and strengthen your community at the same time. If you’re in the US, consider pledging your support to the girl trek movement.

On this past Super Bowl Sunday (4 February 2018), Rihanna’s Fenty Beauty released an untelevised ad on its social media channels – and it’s getting mixed reviews. The NSFW video shows women getting ready for a SuperBowl party (using Fenty Beauty products, naturally) while peppering their phone conversations with the word bitch — clearly referencing the popular Budweiser wassup ads from 1999. While some find it amusing, others criticised the use of a traditionally misogynistic term in such a playful manner.

Despite such criticism, the relatively new makeup line has found many fans. Launched just six months ago in September 2017, Fenty Beauty is already outselling more established makeup brands – with Fenty fans spending five times more than the average online cosmetics buyer. Online research firm Slice Intelligence suggests this immediate popularity is due to its inclusive nature; amongst all of the makeup brands examined for a recent report, Fenty Beauty had the highest amount of black and Latina customers. The makeup line started with an astounding 40 shades of foundation and has since expanded to include a wide variety of colours for eyes and lips. That’s good news, no matter what you think of the ad.

It’s been nearly two years (29 March 2016) since the WHO terminated the Public Health Emergency of International Concern status for the West African countries of Guinea, Liberia, and Sierra Leone. And while the development of an Ebola vaccine (rVSV-ZEBOV) has shown tremendous promise, the region has yet to recover from the epidemic. Many of the over 17,000 survivors continue to suffer from a post-Ebola syndrome which symptoms include joint and muscle pain, fatigue, and even blindness. This continuing need for medical care is overwhelming a healthcare infrastructure that has been severely impacted by the loss of facilities and workers. Yet, perhaps the biggest challenge for Ebola survivors is financial.

Survivors who have jobs are often now responsible for the care, feeding, and education of the orphaned children of family members who have died or are no longer able to find work. Several International humanitarian groups (Samaritan’s Purse, ActionAid, and more) are providing assistance to Ebola survivors through occupational training and literacy classes. While governments and medical response organisations focus on preparedness, perhaps you’ll consider contributing to rebuilding lives across the region.

Finding Beauty in the Diaspora

Over the past couple of weeks, a comment made by the President of the United States has sparked debate over the value of African immigrants to the West, and the US in particular. (We’re sure you know which one we mean, but just in case you missed it, we’re referring to his idea of African countries as shitholes – which, incidentally, Botswana handled with incredible grace.) Wherever you are in the world, it’s difficult not to be offended if you have any connection to the African continent.

Fortunately, and regardless of the immigration debate, there are those that are continuing to find beauty in the stories and images of Africa – and to share them with the world. One such example comes from the Dutch filmmaker and photographer, Dagmar Van Weeghel, whose recent portrait series Diaspora featuring poignant, strong, compelling, and somewhat unconventional images of Africans living in Europe. Through her work, she reminds us that we don’t have to succumb to the negativity shading a beautiful, if developing, continent.

It seems like every time you blink there’s a new diet on the market; lose weight, shed your waistline, develop mental clarity – you name it, and there’s some new way of eating that will get you there. The funny thing is that almost none of these diets are new; most have their roots in the traditional eating patterns that developed long before fast food hit our diets. And, one of the newest to catch on hails from Tanzania.

The Hadza diet first gained widespread Western recognition last year, though it appears to be gathering new steam. Based on the traditional hunter-gatherer diet of a northern Tanzanian tribe, foods are both natural and incredibly diverse. The latter, scientists have come to recognise, is critical to good gut health. In short, the more diverse your diet, the better your microbiome (the collection of bacteria in your gut) – and that translates to better moods, digestion, and overall health. That said, it can be incredibly difficult to find fresh African foods outside of the continent; if you’re looking for a traditional African diet that can be easily sourced in the US and Europe, you may want to check out the recommendations on Oldways. It may not be a strictly hunter-gatherer diet, but their African Heritage recipes are deliciously reminiscent of home.

A Reminder that a Work-out Is Really a Work-towards

With so much of the modelling industry and the fitness media (both social and traditional) dominated by (what some may call) skinny white girls, it becomes easy for people to pass judgement on others, whether it’s the colour of their skin or the shape of their body. And, as anyone of colour visiting a gym in the West knows, the combination of both somehow invites stares (if not scowls). But, it’s important to remember that you’re not just working out; you’re working towards something.

That’s exactly the point Erika Nicole Kendall, a certified fitness trainer and African American wanted to get across in her latest post on Self.com. She’s quick to point out that just because a person’s shape doesn’t match an ideal (whichever one that may be), it doesn’t mean that woman isn’t working out, caring about her health, or doing her best to achieve her physical goals. You can be plus-sized and pleased with your body; in fact, as long as you remain active and are conscious of your eating patterns, then there’s no reason not to be.