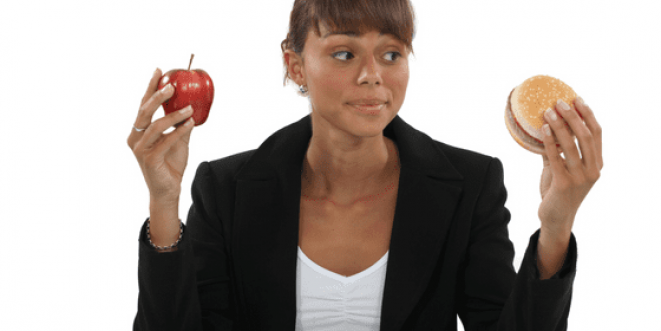 Weight loss happens when a simple equation is met: a person needs to consume fewer calories than she burns. So, it stands to reason that anyone looking to lose weight should decrease food intake and up their exercise (or, at least, activity) game. So far, so good – and no one contradicts it. But, it’s not just a matter of eating smaller portions of calorie-rich foods, as a new study published in the journal Appetite demonstrates.

Though the study itself wasn’t large, but the findings show that it’s better to choose healthier foods than to reduce the portion sizes of less healthy options. Although salad has fewer calories per portion than say, a fast food burger (even a tiny one), you’re more likely to remain hungry after eating the calorie-dense food than the salad. And, that often leads to binge eating and diet failure. In essence, you’ll feel fuller longer if you choose the nutritious option – and you’re more likely to cut your caloric intake in the process. It’s something to think about – especially if you’re prone to making unhealthy choices when hunger strikes.

Black women (in the US alone) spend an estimated $7.5 billion on beauty products. (It’s really not surprising when you consider the effort needed to maintain African hair alone.) They also spend 80 percent more on cosmetics than non-black women in the US. By all accounts, the figure continues to rise.

And yet, US retailer, Walmart, has stores which place beauty products marketed towards black women behind lock and key – though the products aimed at other women sit open on shelves. One woman, wanting to purchase a comb for 48 cents was informed that she would need to be escorted to do so. Clearly, the purchasing power of women of colour isn’t enough to overcome negative racial stereotypes, though the customer in question hopes to change that by suing the retail giant for their racist policies.

Polarity and Pilates (It’s Not Just for White People)

Many fail to realise the impact centuries of oppression, segregation, and racism have placed people of colour. And, when motivated individuals attempt to bring it to the fore, they are often torn down when trying to rise above. Such a point becomes evident when movements such as Black Lives Matter are negatively critiqued for excluding other races from their agenda. No one claims that other lives don’t matter, but it remains tough to have a stance, club, group, or service aimed at including black people without receiving criticism.

That’s exactly what a small group of black pilates instructors in the US discovered when they got together to promote the practice among the African American community. Black Girl Pilates exists to motivate black instructors (and students) to engage with their peers, sharing their troubles and assisting others in the group to overcome similar hurdles. Yet, even this group has been hailed as racist. Members of the team have shrugged off such remarks and continued to focus on their goal of improving black representation in the field. Why not show your support by giving pilates a try? At the very least, your body will reap the benefits of such solidarity.

The New Exercise That Benefits Everyone

Fitness is usually a personal undertaking, even when it happens in a class or at the gym. While your personal drive may inspire others to improve their lives, it doesn’t positively impact the entire world. (That said, if you’re in better health, often your family’s health benefits indirectly; just in case you were looking for additional motivation to get your body moving.) But, a new fitness trend is positively impacting the planet as a whole.

Known as plogging, this trend combines jogging while stopping to pick up litter along the way. Not only does this mean clean parks, beaches, and city streets, it’s also a great workout. Whether you’re carrying a heavy bag to dispose of later (recycling where you can, of course), the reaching and bending extend your range of motion. It’s a win-win for anyone committed to themselves and the world we live in. (And, it’s certainly needed in some parts of the world.) If you’re more of a yoga gal, or you prefer to work out in the gym, you might just consider joining the Literatti movement if litter is something that brings you down.

Blood Is a Big Deal

Back in 1975, the World Health Assembly adopted a resolution designed to end global blood shortages. The aim of every country to obtain 100 percent of its blood supply from voluntary, unpaid donors seems to have gone largely unnoticed in Nigeria, however. The culture of donating blood, which is a norm in many Western countries, just hasn’t caught on. Within its borders, less than five percent of the country’s blood supply comes from voluntary, unremunerated donors. Desperate for increased supply, hospitals often resort to coercive measures (such as requiring donations from family members before a patient is admitted for treatment – or simply paying people to donate). Still, the lack of viable supply often translates into otherwise preventable deaths in emergency situations.

And yet, in Lagos, the blood banks often run over – though there hasn’t been an easy way to deliver needed blood to the hospitals that need it… when they need it. There wasn’t, that is, until a health tech startup undertook to change the way blood is moved. LifeBank is the life-saving link delivering supply to match demand – and they’ve just secured additional funding to expand their operations from Lagos to other areas of the country. Still, unless there are donors to create the supply, patients requiring transfusions will continue to die unnecessarily.  World Blood Donation Day falls annually on 14 June, but you don’t need to wait; it’s always a good day to save a life.