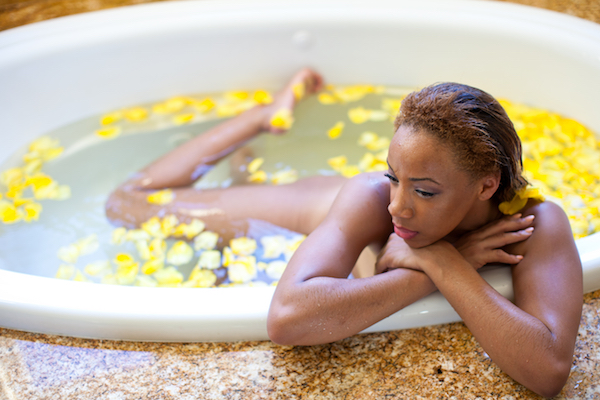 BathTime: It’s Not Just for Kids

German researchers may have identified a new tool to ease the symptoms of depression – hot baths. For this small study, 45 people diagnosed with depression were divided into two groups. The first group was instructed to soak in a hot bath (about 40 degrees Celsius) each day for at least 30 minutes while the second group was told to do 40-45 minutes of exercise twice a week. After eight weeks, the hot bath group had twice the reduction of depressive symptoms then when compared to the exercise group. Hot baths made the participants feel better.

The authors of this study theorise that the effectiveness of hot baths has to do with our circadian rhythm which is tied to how our bodies regulate our temperature. Depression often involves a disrupted circadian rhythm which is why insomnia is a common symptom. But, by increasing body temperature with hot baths, researchers believe that participants were able to re-sync their circadian rhythms, and, therefore, improve mood and alleviate symptoms. Depression is a complicated illness; so hot baths shouldn’t be considered a cure-all based on one small study.  But, taking small steps to “get back into sync” can’t hurt and may do a great deal of good.

Ideally, we should work with a level playing field at our jobs – but we don’t. While prejudice and misogyny certainly are factors in this reality, women are also often socialised to avoid competition and, therefore, don’t take advantage of potential opportunities to succeed at work. After a recent study, some psychologists suggest this instinct can be overcome by using a trick known as “priming”. For this experiment, a group of 400 men and women were divided into three groups. The first was asked to recall a situation in which they had exerted influence; the second had to imagine a situation in which they were dependent on others, and the third wasn’t “primed” in either way (they were the control group). When presented with a competitive opportunity, the decision participants made about the competition followed patterns based upon which group they were in and their gender.

In both the neutral group and the group primed for dependency, 40% of men and 14% of women pursued the competitive opportunity. However, in the group primed for influence, 28% of men and 20% of women chose to enter the competition. Psychologists believe that the memory of an influential situation not only increases the feelings of self-efficacy in women, but also encourages men to not overestimate their abilities. The result of priming is that men and women become more similar in their approach to competitions and opportunities. Think it won’t work? Give it a try.

Two recent studies have shown that a new device used in eye exams can identify the signs of Alzheimer’s quickly and painlessly. Currently, a proper diagnosis of Alzheimer’s includes brain scans, spinal taps, and memory tests. Sadly, brain scans are expensive, and therefore not practical for use in screening the general population. Spinal taps, on the other hand, are painful and carry a risk of infection. Memory tests are inexpensive and easy to administer, but, they’re usually only successful at diagnosing Alzheimer’s after it’s progressed significantly.

This new optical imaging tool – optical coherence tomography angiography (OCTA) – has the capability to see the smallest veins in the retina at the back of the eye. As the retina is connected to the brain by the way of the optic nerve, researchers were looking at whether changes to the blood vessels and structures in the brain would also show on the retina. After comparing the retinas of Alzheimer’s patients, those with mild cognitive impairment and healthy people, two different studies found that patients had a loss of small retinal blood vessels and that a specific layer of the retina was thinner. This might make it possible to diagnose Alzheimer’s earlier than ever before.  While there currently no cure, an early diagnosis allows for adjustments in living situations and time to make arrangements before it progresses beyond control.

The Excuse You’ve Always Needed to Zone Out

We all have coping strategies to deal with tense or emotional times – you know, when there’s nothing you can do but wait. Researchers recently studied one particular coping strategy and found it to be effective if used correctly – flow. Flow is the state of being that is so involved in an activity that it makes time pass more quickly.  And for this experiment researchers used an old favorite – Tetris.

Achieving flow is not easy; the chosen activity has fall somewhere between being too easy and too challenging. In this study, nearly 300 students were told that students in another location were rating their attractiveness. And, while they were waiting to hear the results, they were asked to play Tetris for 10 minutes.  The group playing Tetris at an adaptive level (it changed in difficulty during the test period), experienced greater positive emotion when compared to those who played just easy or just challenging games. So, if you really need to distract yourself to switch off the constant worrying, give moderately challenging physical exercise- or even video games – a try; it might just chase that stress away.

While looking for a link between a natural human protein and cancer, researchers were surprised to find that it was actually linked to metabolism. When they forced the expression of a specific gene in obese laboratory mice, they lost a significant amount of body fat despite being genetically engineered to eat all the time.

The protein, known as BP3, belongs to a group of proteins that regulate wound healing, response to injury, and overall cell growth.  Production of this group of proteins is elevated in the presence of several cancers and it was because of this link that researchers were looking BP3 in the first place. Instead, they found that mice that were given eight BP3 treatment over 18 days reduced their body fat by over a third without side effects.  Additionally, the incidence of hypoglycemia and fatty liver disease was also reduced. As usual, more research is needed. But with obesity being a cause of heart disease, stroke, diabetes, and some cancers, these initial results are exciting.