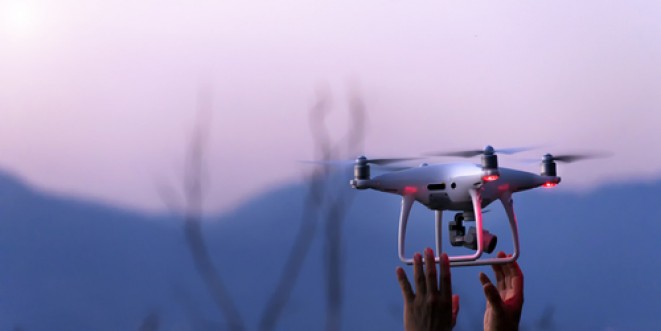 One of the principal causes of maternal deaths is the loss of blood shortly before, during, or after childbirth. Given the high mortality rate of infants or their mothers in Nigeria, it’s something healthcare practitioners in rural areas know all too well. According to the World Health Organisation, 26 percent of maternal deaths due to severe bleeding are the direct result of a lack of emergency blood supply.

However, companies operating in Rwanda and, now, Tanzania have found a way to shortcut the long delays and lack of blood supply in rural areas – medical delivery drones. Zipline has partnered with the Rwandan government to use drones to deliver blood and medical supplies to remote regions. The Tanzanian government is working in partnership with the UK’s Department for International Development (DfID) to deploy their drones. Is this a possibility in Nigeria? We can only hope!

When President Buhari left for London on 19 January, there were a few gripes. The discouragement of medical tourism of ordinary Nigerians is tough to hear when the head of the government is doing just that. With pictures released via social media, the public’s concern was for the state of Nigerian healthcare rather than the situation of the President.

That’s changed. No one heard from or saw evidence of the President during the first few days of February, and that’s when concern began to grow. Due to return to work on 6 February, a letter was sent to the National Assembly on the fifth (ostensibly by the President) requesting an extended leave of absence. Given the circumstances surrounding the President Umaru Yar’Adua, Nigerians are understandably wary of the current situation. While members of the House of Representatives have made it clear that citizens have the right to know, we’ll just need to wait and see.

Given the President’s extended medical holiday in the UK, Nigerian lawmakers are taking the costs of medical tourism seriously, it seems. The Senate recently announced that over $1 billion (yes, that’s US dollars) leaves the country because the domestic health care services are inadequate – and those that can afford it know it.

The current federal budget provides a mere N304 billion for healthcare. That’s 4.17 percent of the total planned expenditure – and it lies in stark contrast to the 15 percent promised by African heads of state in the 2001 Abuja Declaration. Elected lawmakers, perhaps dismayed by the President’s own willingness to leave the country are pushing for more.

Citing the increased healthcare and economic growth of the African countries that have reached the 15 percent threshold, the National Assembly is pushing to increase the healthcare allocation to N1.094 trillion. While a push doesn’t guarantee results, this is the biggest step towards adequate healthcare in Nigeria in a long time.

Working nights? Involved in heavy lifting and manual labour? You may just be cutting your fertility levels without realising it. According to research recently conducted in the US, women required to disrupt their natural sleep cycles for night shifts had fewer eggs that were capable of developing into healthy embryos and babies.

And, those that regularly engage in lifting or moving heavy objects demonstrated a 15 percent decrease in the number of eggs ready for fertilisation. Yikes! While the research hasn’t concluded the whys nor necessarily ruled out other factors that could contribute to reduced fertility, the basics are there for the taking. Be sure to work with your body’s natural sleep cycles when you can. (But, don’t give up strength training altogether; studies indicate its benefits.)

While strides have been made to improve the quality of life and increase the lifespan of those living with HIV/AIDS, there’s currently no cure for the disease. Let’s say that again; there is no cure for HIV/AIDS. Researchers are definitely working on it, but the claim of Maduike Ezeibe and his “Aluminium Magnesium Silicate” is untested. His assertion of a cure may well do more harm than good at the moment.

Ezeibe claims to have successfully treated ten patients with his therapy, though six of those subjects do not meet the standards required to be declared HIV/AIDS-free. Moreover, the National Centre for Disease Control (NCDC) has made it clear that until the “Aluminium Magnesium Silicate” treatment has made it through four successful rounds of clinical trials, no one should view it as a cure or an alternative ARV treatment. Don’t gamble with your life or anyone else’s by falling for untested claims. If you have concerns or require clarification, instead call the National Agency for the Control of AIDS (NACA) hotline on 6222 (it’s toll-free from Etisalat and Airtel lines).

On 6 February, the world marked the United Nation’s International Day of Zero Tolerance for Female Genital Mutilation (FGM). Despite criminalising the practice in 2015, Nigeria still has high prevalence rates of this disastrous custom. It’s believed that six states still have FGM practice rates above 60 percent of their female populations. Sadly, the continuation of this practice will require more than laws; education and a change in community norms are necessary.

That’s exactly what UNICEF hopes to achieve by 2030. They cannot do it alone, however. It’s estimated that more than 200,000 million women have survived FGM and its effects and the number will continue to grow until traditional communities realise there are no medical benefits – and often extreme complications with the practice. Organisations such as Wellbeing Foundation Africa are working to eradicate FGM by training practitioners in life-saving skills such as midwifery to provide substitute employment. See how you can get involved with Toyin Ojora-Saraki’s organisation or consider spreading the word with these UN publications.