Motherhood: The Journey, A Look Inside Radiant No. 15 (Editor’s Note)

In my early years of pharmacy practice, while working in the labor and delivery unit, it struck me that every woman presenting to our hospital for delivery, regardless of her pregnancy risk factors, was prescribed at minimum a three- to four-page list of medications. And while not every patient would end up needing all of the medications on their list, a good portion was often used by the time they were discharged.

The fact that this was standard practice made me wonder: What if I don’t want this type of intensely medicated birth?

This was 13 years ago, before water birth and home birth had become widespread. Naturally I consulted Dr. Google for answers, and he delivered to me a whole new world of unmedicated birth options which I ate up like a hungry lion.

As it turned out, I was also in the early weeks of pregnancy with our first child. Armed with half-baked information and the wild enthusiasm of a rookie mom-to-be, I found an obstetrician who agreed to a non-medicated birth plan with minimal medical intervention unless absolutely necessary … until she didn’t.

About seven weeks before my due date, when I asked to solidify the birth plan in writing so that all of the providers involved in my delivery care would be on the same page, my obstetrician suddenly became uncertain and shaky about our agreement. I lost confidence in her and sought an alternative.

Thankfully, a midwife I had initially considered agreed to take me on, and I went on to have an uncomplicated and beautiful delivery in a house, located in a quiet neighborhood, that had been converted into a birthing home.

Three years later, when I became pregnant with my second child, I immediately went with a midwife. My second child was born at home in my bedroom.

When I chose a non-traditional birthing option, I wasn’t yet aware of the disparity in birth outcomes for Black women, or of the bias in medical care for Black people in general (Pregnant While Black—A Risky Proposition, page 102).

Nor did I fully appreciate the support from my village, most notably from my mom, which I had simply expected and in some ways taken for granted. As is the custom in our part of Nigeria, my mother put her life in Texas on hold and, leaving my dad to temporarily fend for himself, moved in with me for the last two weeks of my pregnancy plus six more weeks postpartum.

In the weeks after the birth of my son, Mom cared for me fully, cooking the daily traditional postpartum meals with medicinal herbs purported to help with postpartum healing and recovery, and caring for the baby in every way from bathing him to keeping him at night, only bringing him to me to breastfeed. All so I could rest and recover.

Fearing judgment, however, I’ve rarely talked about my home births or the level of support I received. As the disparity in outcomes for Black women have come into the limelight, thanks in part to birth stories shared by Beyoncé and Serena Williams, more and more Black women are sharing and opening up about their own journeys (Against The Odds: A Mother’s Journey, page 108; This is My Abortion Story, page 92), prompting me to open up more about my own.

One night some years later, my parents were due to fly back to Texas after visiting with us for a few weeks and we decided to take them out for dinner. We were all piling into the car when I felt a strong urge to push.

I excused myself from the car and ran upstairs to the bathroom. It wasn’t long before it came out. I heard the thump as it fell into the toilet. When I looked into the bowl, the water was a sea of red. I debated pulling it out to have a look at it. But of what use would that be? I said a prayer and flushed.

Then I got back in the car and went to dinner without saying a word.

Two weeks earlier, a silent sonogram and an eerily quiet technician had revealed that the baby I was carrying was no more. I had declined the D&C, and on that fateful night it made its exit.

I have rarely spoken to a woman about my miscarriage who didn’t say, “Me too” (How to Grieve When the Unthinkable Happens, page 164). Who knew miscarriages were so common?

And the Biggest Hurdle Yet

I was almost 18 years old when my family moved from Nigeria to America. My youngest brother was only 6.

One day I was driving him home from school and he said, “Nnenna?”

“Hmm,” I answered, looking in the rearview mirror to make eye contact.

My heart sank. I knew then that something must have happened at school that day. I was afraid to ask what, and I didn’t know what to say to him. How was I to tell him that I’d only just found out at age 18 that I was Black and didn’t quite understand what that meant?

I’ve worried about the day that my 8- and 12-year-old sons will find out they are Black. In this age of #JusticeforAhmaudArbery, #JusticeforGeorgeFloyd, and #JusticeforBreonnaTaylor, I fear I’m delusional to think that day hasn’t already come and gone.

Raising Black sons in America is proving to be my toughest parenting challenge yet. My husband and I have no reference for it, having both grown up in Nigeria where Blackness is the norm. By the time I encountered racism in America, my knowledge and conviction about who I am was distinct from any racist views about who I’m supposed to be. It would be like a stranger telling me that my name is Sheila when I know with 1000% certainty that it is not.

In that sense, navigating my way through America’s racism has been more bearable for me compared to my Black peers born and raised in the U.S. But now that I’m raising Black sons in a society that’s bent on letting them know from inception, and by any means necessary, that they are less-than, I find myself uncertain and helpless about how to spare them or ease them through this agony of being Black in America.

In this I cannot look to my parents or to my own upbringing for answers. This is a path that we have to forge on our own, searching for and embracing the creative solutions and discussions that people who look like us are creating (On Parenting Black Boys, page 80, and On Parenting Black Girls, page 86).

In short, like a bittersweet chocolate pie, motherhood is a perplexing contradiction—difficult and complicated but also sweet and beautiful—the breadth and depth of which can never be fully captured, expressed, or contained in one magazine issue.

But that didn’t stop us from trying.

I hope you enjoy our slice of motherhood. 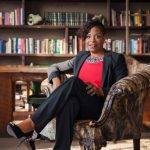 Nnenna, a public health pharmacist, is the Founder and Editor-in-Chief of Radiant Health Magazine.