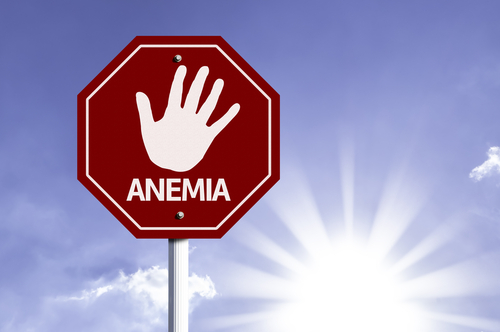 Anemia is a medical condition in which there is a lack of healthy red blood cells (RBCs) to carry oxygen throughout the body, supplying tissue and organs, and mediating essential functions. When the tissues don’t get adequate oxygen, organs and functions deteriorate. In pregnancy, anemia is associated with low birth weight, premature birth and maternal mortality (death).

Women who are pregnant are at greater risk for anemia. A woman who is pregnant has about 1.5 times the normal blood volume than when she is in the non-pregnant state. Most of the increase is in the fluid component of blood. The number of RBCs increases, but not to the same degree as the fluid. It’s called “physiologic anemia” – there is no lack of RBCs. It is most common in the 2nd trimester. There are some true anemias in pregnancy. Mild anemia is easily treated, especially when it is detected early in pregnancy. It can become dangerous, however, to both the mother and her child, if it goes untreated.

There are several types of anemia which are especially prevalent during pregnancy:

Iron-deficiency anemia: This is the most common type of anemia in pregnancy; it affects 15-25% of pregnancies. Iron is a metal that is an essential building block of hemoglobin, the part of RBCs which carries oxygen from the lungs to every cell of the human body. When there is insufficient iron in the diet, the blood’s ability to supply oxygen is reduced.

Folate-deficiency anemia: Folate (also called folic acid) is a vitamin that helps reduce the risk of abnormal development of the brain and spine. It also is essential for the production of normal RBCs. In pregnancy it is commonly taken as a supplement, and is usually included in prenatal vitamins. Folate can also be found in fortified foods, and some foods which naturally have significant folate, such as cereals, leafy vegetables, bananas, legumes, and melons.

Vitamin B12 deficiency anemia: This vitamin is also essential to the production of healthy RBCs. Although most women get enough B12 in their diet, the body may not absorb the vitamin well, producing a deficiency.

Symptoms of anemia in pregnancy may be mild at first, but without treatment, the anemia progresses and symptoms get worse. Some common symptoms are: weakness or fatigue, dizziness, shortness of breath, a rapid or irregular heartbeat, pale skin, lips and nails, chest pain, cold hands and feet, and trouble concentrating.

Anemia in pregnancy increases the risk that the child will become anemic later in infancy. It can also burden the mother, leaving her with no reserve if there is excessive bleeding with delivery.

Some factors can increase the risk of a woman becoming anemic in pregnancy: 2 pregnancies close together, pregnancy with more than one child, frequent vomiting early in pregnancy, a diet poor in iron, and heavy bleeding with menses prior to pregnancy.

Good nutrition is the best way to prevent anemia if you are pregnant or trying to become pregnant. It is recommended that you consume at least 30 milligrams of iron per day. Your doctor may prescribe vitamins with iron and folate.