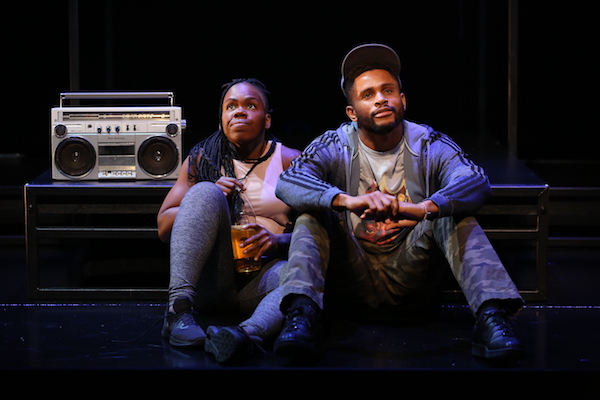 Healing can mean different things to different people. It can also take on very different forms for an individual at different points in their life. Radiant Health Magazine sat down with actor and playwright Ngozi Anyanwu on the eve of the New York premiere of “Good Grief,” Anyanwu’s semiautobiographical, off-Broadway play. Anyanwu’s “Nkechi” travels through the space and time of her own memories throughout the play, dealing with the death of a lifelong friend while discovering new things about herself and loved ones. We chatted with Anyanwu about growing up as a Nigerian-American in white suburbia, breaking stereotypes, and being her most authentic self while creating characters everyone can relate to.

How did you get into acting and working as a playwright?

As a Nigerian, my parents always had the dream of a doctor, lawyer, or architect, but I was someone who never really listened. I was an average student until I found theater, something I could be nerdy about. I did my undergraduate and graduate school in theater, and by the end of my third year of graduate school I finished my first play, which became “Good Grief.” I had written small sketches with friends as well, through this group called First-Generation Nigerian Project with a bunch of other friends who were also first-generation Nigerian entertainers.

Can you speak a little bit more about the First-Generation Nigerian Project?

Around 2009 I was noticing a lot of plays being written about Africa, but everything was war-torn and chaotic. I also had a lot of first generation women in my life who were going back home to Nigeria after not being there for a long time. Eventually, we got together to see if there was a story in there, and we had a director that coordinated the whole thing and got us to write together and make stories and direct each other and perform. We did it for two years periodically and wrote stuff about our parents, being fish out of water, being performers, and the ridiculously high expectations that were set for us. Yvonne Orji was in that group. She was living in Washington, D.C. at the time, and she would drive up once a month and hang out with us and write.

I think the surge of African entertainers dominating the field has a lot to do with immigration. Our parents came here in the seventies, late sixties, and had kids. Half of us are doctors or nurses, but even among those who deviated, our parents ingrained in us the need to be successful. Whether that need for perfection is healthy, I don’t know, but I will say you’re seeing a surge in African entertainers because there was an intense brainwashing that said you must be successful, no matter what that looks like. Because we creative types deviated so much from the “plan,” I think there’s a lot of chips on our shoulder to actually do well. This what not our parents’ plan, but the success part was their plan.

What inspiration led you to write the script for Good Grief?

This play was very much based on my best friend who passed away when I was 20. I wrote the play on the tenth anniversary of his passage. It was very much a homage to myself at that age, because his death was a catalyst for a lot of change in my life and for growing up. I remember that time being really important for my development.

You’ve mentioned that the play is semi-autobiographical. How do you see yourself in the character you play, Nkechi?

A lot of this was triggering. It was also a lot of jumping back into what it meant to not know. I highlighted my experience of being a suburban kid, a fish out of water, who nevertheless still had a community. I grew up in a very predominantly white neighborhood, but when I would come back home, it was Africa. So, I very much wanted to reflect that bicultural, very American, suburban neighborhood I grew up in, but also the African household, and how those things can sometimes be in conflict with each other.

We’ve seen the trope of the overbearing Nigerian parents vs. the creative- leaning Nigerian-American child before. What makes this story different, and what are some ways you made sure that each character was dynamic and unique, rather than fitting into stereotypes?

For us, it was about casting parents from within the Diaspora. We also made sure to let them grow throughout the play, and learn how to be parents. The audience learns where their strictness and overbearance come from; we give a little pathology. We see where she (Nkechi) rubs off on her parents as well when they take time with each other and listen. So, I think what stops it from becoming a stereotype is the fact that these parents actually get to grow and change throughout the play.

This is a memory play, taking place through Nkechi’s recollections rather than a straightforward plot. Did this structure allow for more creativity in the storytelling?

I think at first it was hard because it was about trying to remember things exactly as they were, and I eventually had to let that go because I’m writing 10 years later; you can’t remember everything. I had to let go of the idea that I was ever going to get anything right. Once I let that go, I had a lot more creativity and freedom to let this be a homage and a play as opposed to a docu-drama.

Let’s talk grief. The play touches on how grief is experienced in different cultures. How would you say the American experience of grief differs from the African?

How has the reception been to the play so far?

We did it in Los Angeles last year and it was beautiful. We had a lot of people really respond to it. It’s about death and grieving, and missing people, and I think everyone can identify with that. We had beautiful people coming up to us and telling us stories about people that they love and miss. So that’s been really lovely.

What do you hope audiences take away from the play?

I hope their empathy will grow. That’s the main hope. I think we’re so fixated on identity and separatism, and I hope that audiences will see that I’m literally just like you. Yes, I have these African parents, but I lived in the suburb down the street from you, and I go through pain like you. I hope that in this climate we can actually see each other for who we are, and see that we’re much more alike than different.

In a past interview, you mentioned that as a playwright you really just want to “heal your people.” Could you expand on that?

We got a lot of stuff. I don’t just mean Africans, but black people. There’s a lot of fixation on our trauma and our pain, but very little on our healing. We now have concepts like black joy, and I love that. I’m just really interested in making work that doesn’t necessarily solve anything but gives a first step towards how we can heal that pain and trauma.

Can you tell us about the pilot you’re developing with JuVee Productions and ABC Signature?

I’m currently developing a show with JuVee Productions and ABC Signature, but I can’t say what it’s about just yet. I’m also commissioned with Atlantic Theater Company, an off-Broadway theater company, so I’m working on a play with them, as well as the Old Globe Theater in San Diego.