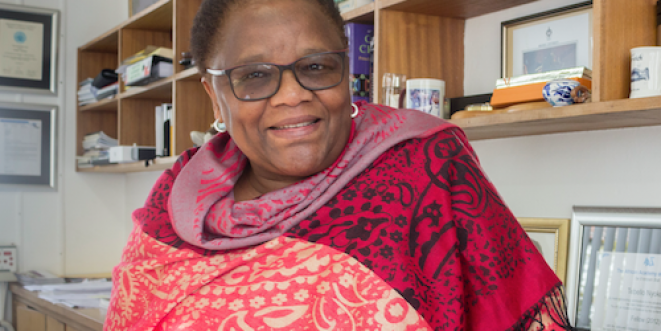 An advocate for education and a role model for success, award-winning chemist and researcher Tebello Nyokong has earned her place at the top of her field.

Growing up during politically unstable times in Lesotho, South Africa, Professor Tebello Nyokong always had an ambitious streak and wasn’t afraid of hard work. She spent her childhood alternating between going to school and helping her family as a shepherd, and as a young adult she resisted those who argued that scientific study would prove too difficult for her.

Nyokong trusts in one surefire way to reach your highest potential. “I believe all people can overcome their unfavorable circumstances through education,” she asserts.

When you look at her growing list of achievements, it’s hard not to listen. Nyokong currently holds a Distinguished Professorship of Medicinal Chemistry and Nanotechnology at Rhodes University in South Africa and serves as chair of the Department of Science and Technology and National Research Foundation (DST/NRF).

Since she joined the faculty in 1992, Nyokong has been recognized by the Royal Society in Chemistry and the Pan African Chemistry Network as a Distinguished Woman in Chemistry. Nyokong is dedicated to empowering a new generation of Africans fit to dominate the science and technology world, and she advocates for African nations to better invest in a solid science infrastructure.

As a professor and the director of the Nanotechnology Innovation Centre at the university, Nyokong has trained numerous doctoral and masters students who now hold high positions in government and industry in countries such as South Africa, Ghana, Nigeria, Australia and the U.S.

In addition to being an educator, Nyokong is also an avid researcher. She and her team are involved in research into photodynamic therapy (PDT), a relatively new cancer diagnosis and treatment methodology that is less invasive and more efficient than chemotherapy. Through lasers and the same kind of dye used to color blue jeans, PDT is designed to highlight and kill cancer cells without destroying healthy cells or causing the other common side effects of conventional cancer treatment.

Though Nyokong’s scope of influence is global, she is very clear about what motivates her efforts. “My main driving force is my passion for Africa,” she says. “We are viewed as a continent of war and famine, and not as a major player in science and technology. In my small way I wish to change this perception.”