How Many Times Can Frying Oil Be Reused? 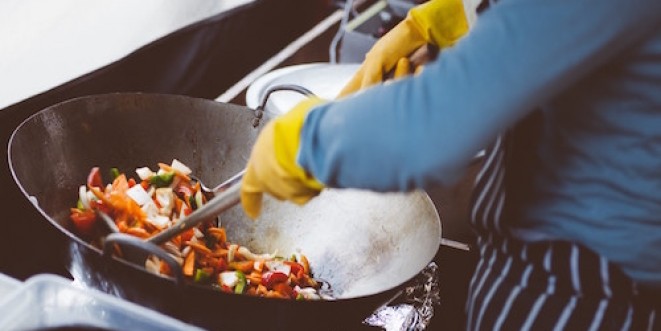 If you are like most people, you probably reuse your deep-frying oil many times. After all, it can be expensive, and it might seem wasteful to throw it away!

However, reusing oil does pose health risks. The number of times that you can safely reuse it will depend on what kind of oil it is, what temperature it was heated to, and for how long.

Each time oil is heated, its fat molecules break down a little bit. This causes it to reach its “smoke point,” the temperature at which it literally starts to smoke and give off a bad odor, more quickly each time it is used.

When this happens, unhealthy substances are released both into the air and into the food being cooked.

An oil heated to high temperatures releases toxic fumes. Fumes are given off even before the smoke point is reached, but increase dramatically when the temperature goes above smoke point.

One study found that canola oil, which has a high smoke point, gave off the lowest level of toxic fumes. Coconut oil gave off the most fumes, and at the lowest temperature. Extra virgin olive oil and safflower oil were in the middle.

Free radicals are also produced when an oil reaches it smoke point. These are molecules that damage cells in our bodies and can potentially cause cancer.

They are absorbed into the food being fried, and may then go on to cause cancer or other diseases in the people eating those foods.

Trans fats are “bad” fats that increase risk of heart disease. At high temperatures, some of the fats in oil change into trans fats. When oils are reused, the amount of trans fats gets even higher.

One study looking at olive and groundnut oils found that trans fats increased significantly in both when they were reheated.

HNE (4-hydroxy-2-trans-nonenal) is a toxic substance that may increase risk of Alzheimer’s, Parkinson’s, stroke and LDL (“bad”) cholesterol. Heating oil to or above 190 ˚C causes HNE to form.

While using oil just once causes HNE to form, reusing it will cause even more HNE to build up.

How to know when it’s time to change cooking oil

By now you may be thinking, “But I have always reused oil! Can I really only use it once??”

The safest thing to do is to use new oil each time. However, there are some things you can do to limit the risks of reusing it.

If the oil looks cloudy, foams, or has a foul taste or smell, it is time to discard it.

If it is still okay and you are planning to reuse it, strain the oil through a few layers of cheesecloth to get rid of any food particles before storing it. Store oil in a sealed, light-proof container, and keep it in the refrigerator if possible. Storing it in a cool, dark place is the next best option.

Do not mix different types of oil together.

Fry foods no higher than 190 ˚C. Use a thermometer to track temperature.

Shake excess batter off food before frying it, to limit the food particles that are left behind in the oil.

Choose stainless steel pots or pans to fry in. Avoid iron or copper, since they will make oil go bad more quickly.

Finally, turn off the heat right after you are done cooking. The longer oil is heated, the more quickly it will go bad.

Even if the oil still seems okay, experts recommend discarding it after 3 months.

Choosing the healthiest oil to fry with

While it may seem logical that healthier oils, like olive oil, would be the best choices to fry with, this is not always the case.

The healthiest oil to use will depend on how high of a temperature you will be using.

Each oil has its own smoke point.

When an oil is heated above its smoke point, toxins increase greatly. Therefore, the choice of which oil to use should take into account both the health of the oil itself and the temperature that will be used.

For example, while olive oil is healthy at lower temperatures, if you will be frying foods above 210 ˚C, it would not be a good choice.

Palm oil, groundnut, safflower or soybean oils can be heated safely to the highest temperatures. However, these oils contain a lot of unhealthy saturated fats.

Canola oil may be the best option in many cases. It contains the most unsaturated fats of any oil (even more than olive oil) and it has a higher smoke point than olive oil. In addition, it is generally much less expensive than olive oil.

How to dispose of cooking oil

Do not pour cooking oil down the sink! It will cool down in your water pipes and congeal, causing backups in your sink or septic system. Washing oil down the drain with dish soap and hot water does not help. The oil will still harden and cause blockages in your pipes or further down the sewer line.

Instead, pour oil into a metal container such as an old coffee can, or a milk jug. Seal the container with its lid, and then throw it into the trash.

In some places, used cooking oil can even be recycled.

While frying is certainly a tasty way to cook, experts suggest limiting the amount of fried foods eaten.

People who eat a lot of fried food are also more likely to be overweight or obese. One study estimated that eating fried foods more than 4 times per week increases risk of overweight/obesity by 37%.

Avoiding excess weight is more than just a matter of looking good. Overweight or obese people are more likely to get heart disease, diabetes, metabolic syndrome and some types of cancer.

If you grew up eating fried foods, it may be difficult to consider giving them up.

Rather than giving them up completely, you may consider cutting down. If you eat fried foods 4 times a week now, for example, perhaps you could cut down to twice a week.

Oven roasting can be a good alternative to frying. Roasting causes foods to caramelize, which creates a lot of flavor.

Grilling with a charcoal or gas grill is also a flavorful way to cook vegetables, fish and meats.

Experimenting with other cooking methods can be fun; perhaps you will even discover new ways of cooking or new foods that you love!