Welcome to part 6 of my journey through my first pregnancy! If you’d like to start from the beginning, please check out parts 1 through 6: my preparing for pregnancy in “Getting Ready for Baby,” visiting the doctor in “The Start of the Shortest Ride,” returning to Lagos in “Period Three or a BFP?” dealing with my new reality in “So Many Decisions to Make,” reflecting on what I’d learned so far in “Lessons of the First Trimester,” and putting down roots in “Time to Decide.” This week, I go for a ride on the emotional roller coaster!

Being pregnant was so much different than I’d envisioned it. I’m one of those women who can’t live in the present, and I had a vision of the type of pregnant woman I was going to be. The vision was like this:

Now as I read that list, I realize how obnoxious I was. Nothing in there had anything to do with the baby and everything to do with me. In fact, my husband didn’t even show up in that sterile, idealized picture of a pregnancy. Thankfully, it didn’t turn out that way. The only things on that list that came to pass as I envisioned them were that I got pregnant and that I’ve been strong up to this point. As for the rest, well, what had happened was . . .

I worked out sporadically, I ate healthy most of the time, and I gained weight. The other thing I hadn’t expected to do so much of while pregnant was traveling. By month five, I had moved four times – between countries, within cities, and across states. Plus I had one more move ahead of me, to the home that we were going to bring our little one into.

Finding Out the Who

We’d always known that we’d check the sex of our baby. I’m not one for surprises, and I wanted to be able to buy some gender-specific baby clothes rather than focus on the neutral yellows and greens. I was still in Houston, so the hubs made the six-hour drive to be there with me.

We spent the first few minutes at the doctor’s being goofy. 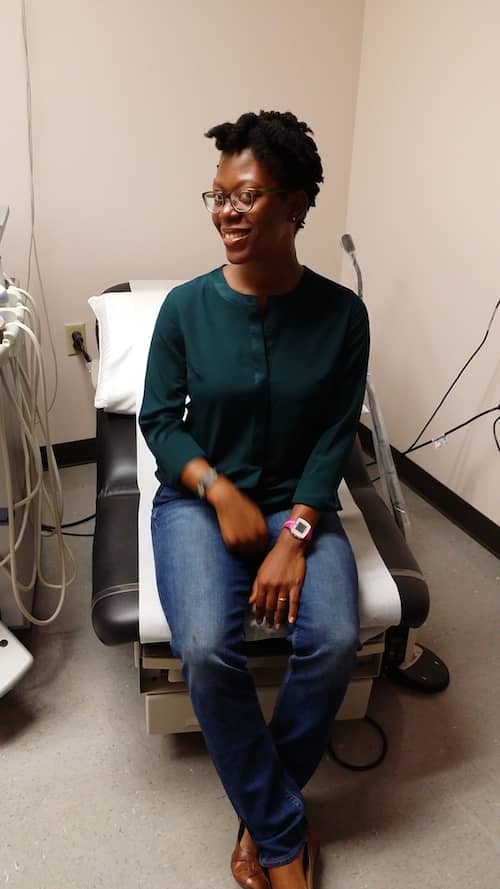 From taking weird pictures to talking about what we expected to see on the ultrasound, I was glad to have the mister there. With the ultrasound scans, I learned to focus on hearing the baby’s heartbeat and to nod and smile when the doctor showed me the body parts that didn’t really look like body parts to me – I could never tell what was what.

After sharing with us the calming sound of the little one’s ticker, the doctor went on to show us those mysterious body parts and to figure out what the baby was doing. Lil’ one actually waved at Mommy and Daddy right in the middle of it – it was amazing! And then the doctor looked at the baby’s bits and gave us the news. We were stunned! Since some things are meant to be kept secret, I’ll be sharing this piece of news when the baby comes.

For the longest time, I had romanticized the idea of being a stay-at-home mom. I would maintain the household, make sure my kids ate all organic food, and do a lot of writing on my computer. It sounded so idyllic, but after leaving my job in Houston for one in New Orleans, I realized that it was nothing more than a pipe dream.

I took five weeks off between jobs to unwind, and it took me just days to see what my friends had been telling me for years: I’m not cut out for a life at home. Those weeks between jobs were the least productive I’ve ever had, and I didn’t make even one trip to the health food store to stock up on said organic foods. Instead, I spent most of my time watching TV, and the only thing that turned out as I’d expected was that I took care of business from my computer.

The emotional and hormonal roller coaster that is pregnancy was one that I couldn’t have prepared for even if I had tried. One minute I was worried about something important, and the next I couldn’t remember what it was. One minute I was happy, and in no time flat my focus would shift to the fact that I was bringing a child into a world filled with turmoil.

The emotional low point for me came when I finally got to New Orleans and was settling into living life with my husband in the same city for the first time in years. Finally living together, knowing that no one needed to pack a bag in a few weeks was amazing – and then he got a call that he needed to be in Houston for a night. I lost it.

I had spent five weeks at a time thousands of miles away from this man, and the idea of being apart for one night was too much for me. When he told me about the trip on the phone, I was calm and rational, especially since he thought we could head out for our babymoon from Houston. Then I went to take a shower, and as I stood there with the warm water running over me, I burst into tears. I must’ve cried for 30 minutes and was so scared that I was hurting the lil’ one. And then, 30 minutes after that, it was like it had never happened. Like I said – roller coaster!

We wanted it to be Hawaii. In fact, we had already started talking to friends who had gone to Hawaii for their holidays, and we picked the island of Maui as our destination. But it wasn’t meant to be. After just having switched jobs, there was no way I would have enough vacation time to take the trip in January as we’d planned. Plus I had to save some time off for when the baby came.

But all was not lost, as we still had a trip planned. Four years ago, my husband and I got married in Las Vegas. He wanted a drive-through wedding, but we settled on a chapel instead. It was the best wedding we could afford, but unfortunately, none of our family could be there.

Now we decided that it was time to honor tradition and also to have a ceremony that our family could be a part of. Thankfully, my mom took charge of planning the traditional wedding, and all we had to do was show up. So our babymoon was going to be in Nigeria, where we would be getting married again on the first day of my sixth month. Woo-hoo!