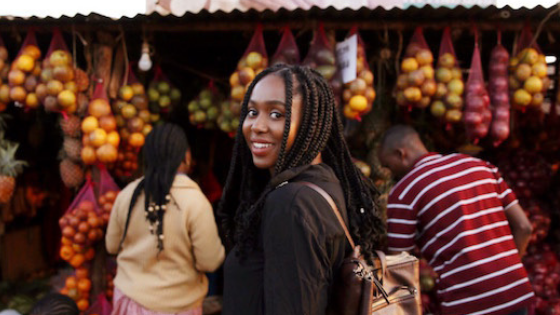 F ood can do so much more than just satisfy the stomach. In this Radiant Woman interview, we sit down with Kiano Moju, a video producer at the food-based Buzzfeed vertical Tasty, which recently branched out into its own entity. For Kiano, food is a way to bring people together, bridge cultures, and travel through time and space. Raised between her grandparents’ home in Kenya and her mother’s home in Northern California, Kiano uses the improvisation of her bi-cultural background to create innovative dishes that still remind her audience of home, wherever that may be.

Give us a little background on your cultural upbringing

I grew up primarily in the San Francisco Bay area, but my mother is from Kenya. From age six, whenever I had a break from school in the summer, I’d spend it with my grandparents who have a ranch in the mountains of Kenya. From a young age, I got to grow up in quite different cultures. My mom’s family is very traditional Maasai: when I visited, I was going to a traditional farm home made out of the elements of the land, and without electricity. Then it was back to school in Berkeley. It became more spaced out when I got to college, but I just went two weeks ago and it’s still my second home.

I see from your website that you started taking culinary classes at age six. Who or what sparked your love of food?

It all started with an Easy Bake Oven. I got one for Christmas when I was six. I would make those little cakes under the tiny light bulb and try to feed them to my family. So, my mother found a cooking class that wasn’t formal, just two women who organized it in Berkeley. I’d go from soccer to my cooking class and we’d learn how to make a lot of American food, but also Central American food, and it’d end with a big lunch we made to eat with our parents. I just took off from there.

How has your background influenced how you pursue your love of food?

I definitely think that from spending the summers in Kenya with my grandparents, I not only saw cooking as a utility tool to feed yourself but for the lifestyle especially on the ranch, cooking was the biggest social activity you’d do with people. It wasn’t just something for food, It was the way people hung out. Everything on a farm is about food and preparing food all day every day, and here in America, I’ve adopted food as my social activity. That’s why hosting dinner parties is very much a connection between me and others. I never really realized it, but I’ve always been obsessed with having people over for food. I definitely think it comes from spending so much time in a place where food was the central activity.

Could you describe a little bit about what you do at Tasty and Buzzfeed?

My title is video producer. Here, being a producer means I think of what recipe I want to write, test that recipe, shoot that video, and then edit it. It’s very much like a one-man band, but it’s really cool because you can see your vision become something physical without being altered too much. You learn a lot of skills here.

And do you just pull recipes from thin air? How do you conceive of them?

It’s nice because I’m not only constricted to doing recipe videos. As long as it’s about food, it’s fine. I can go do a recipe video inspired by my travels or just very attuned to what’s happening in the food world. I try anything I see on Instagram, and if someone works in the food world I try to follow them just to keep in the know, and on an international level.

Sometimes it’s just that I really crave something. I’m like, “I love this food, and I’m sure somebody else loves it too. How can I present this to them in a new way they haven’t tried before?” That’s the day to day, but my big mission at Tasty is to figure out what we haven’t seen enough of, and, since we have such a big platform, how we can put them on. What are the cuisines people don’t know enough about or have never even heard of? And then try to collaborate with internal or external talent to highlight certain cuisines. That’s probably my favorite part of the job.

What are a few lessons or takeaways you have from growing up between your various cultures, and mastering the cuisines of both?

I noticed that what’s different from the cultural cuisine that I have from my family side and the stuff I grew up making is that there’s a lot more complexity that you can accomplish with humble ingredients by learning techniques from different cultures.  I’m able to pull the techniques from how I make a Spanish dish into how I make a Kenyan dish. Pulling from this knowledge, I can create a dish that’s still very familiar, people can look at it and identify it, but I can transform it flavor-wise, pulling from techniques from global cuisines. It’s really fun, but I never would have thought to do that before when I was so focused on doing things a certain way.

Your recipes tend to bridge different cultures. What place do you think cultural cuisines have in connecting people?

Food is interesting because it hits so many things: it’s history, it’s science, it’s art. So, when you eat and you’re focused on the eating and enjoying, so much can go on. Food brings people together, and it can also transport you into different cultures and places and bring about very different discussions. Through food you can spark conversation about different geographical and political issues around the world. So, it’s a really weird vessel for whatever you want it to be. Food is everywhere. You can’t avoid it.

Can you describe a moment when your food, or food you were given, has brought people together?

This is cliché, but it was a Thanksgiving dinner, my second year living in London for graduate school. Year number two was really special because I had so many friends come to London. It was a very weird political time, right around the American elections and I had some friends from the Midwest who were dreading going home for that Thanksgiving dinner, knowing that many family members had very different political views than them. So, my house ended up being like a safe haven for a few of my friends. I had a friend from Paris, two from the Midwest, one from boarding school. We cooked together the entire time. I can’t tell you what we talked about or what we ate, but I just remember the feeling. The holiday didn’t have any special meaning but just to have the space and the place to ourselves, and just enjoy ourselves. That photo is still the background of my computer. Being able to connect people from so many places with one table. It was probably my favorite meal I’ve ever cooked.

Travel food journalists like Anthony Bourdain (may he rest in peace) use food to show humanity in different, lesser-known cultures. Where do you believe you fit in that?

I think the biggest thing for me is to inspire other people to look around them and wonder what they’re not looking at. And I’m so lucky to have a team that helped me get the ball rolling. Essentially, I just want to be a voice turning people’s heads the other way. One person can’t carry all of that because there’s so much that has been under-covered or ignored.

Is there any African cuisine that you think is slept on?

The funny thing about African cuisine, at least where I live in Los Angeles, is that you don’t have access to it. I can go online and find a recipe and hope it’s solid or someone can invite me over. But it’s not spoken about nor is there a lot of access to African cuisine. I really can only say I’ve had food from six countries on the continent. I think more than a specific country, the entire continent is slept on. I did a video for Tasty with Nnedi Okarafor, and she spoke about the lack of attention on African cuisine in an interesting way. A lot of people have this perception that Africans don’t even eat, let alone have sophisticated cuisines. For that alone, I think I’d like to see more people putting it out there. Because it’s really hard to access and opening a restaurant in the U.S. is so hard. I’d love to see more blogs come up, and access to the resources to make these foods. One of the things I liked about living in the UK is that my friends had a lot more knowledge of African cuisine, though that has to do with culture and proximity. America is on a whole other timeline.

Some of your recipes are quite ambitious. What advice do you have for someone just starting out in the kitchen who wants to get creative?

I’d say when you’re just starting out with cooking, the first thing you should learn is how to make your favorite food. Make what you love because it’ll push you to pursue it and make it better because it’s something that you’ll be eating time and time again. I think people spend a lot of time trying to conquer something that doesn’t have a big role in their life. You’ll kind of move on from it. But if you love lasagna, you should try to learn how to make lasagna first. And then go on from that.

Where do you see your culinary passions taking you in the future?

I love making videos. I think video for the moment will always be a part of my culinary career, but I’m also traditional and I love cookbooks. I will happily make cookbooks until the day I die. I love them and you can just have them forever; they’re a great resource.