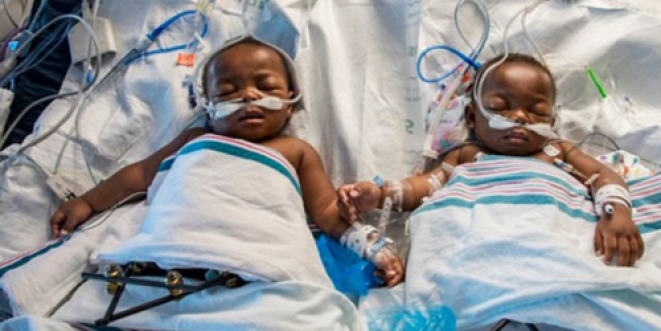 In June, a Nigerian family travelled to Le Bonheur Children’s Hospital in Memphis, Tennessee, USA. In the months that followed the Ayeni twin girls spent all their time together. They had no choice; the girls were born conjoined at the pelvis. Less than one year old, the girls were observed in preparation for a surgery that would separate them.

And, while the world watched the American elections, the Ayeni family celebrated a successful operation. While the girls have a lot of rehabilitation ahead of them, they can celebrate their first birthdays with the promise of independent lives. The hospital provided the surgery free of charge and Arik Air sponsored the flight for the entire family.

Pass on the Meat to Protect Your Heart

Though there are plenty of celebrities that swear by their high-protein diets, you may want to think twice about yours. Studies demonstrate that women who consume high-protein diets are far more likely to suffer heart failure as they age. Yes! Your heart could stop from too much meat in your diet.

Women who eat a lot of meats and animal proteins have a 60 percent greater risk of heart failure – especially once they reach 50 years of age. However, women who consume most of their protein from plant sources can reduce their risk by 20 percent. Of course, you don’t need to cut meat from your meals entirely, but you definitely want to fill your plate with veggies first.

The Federal Government just released some shocking figures about malaria in the country.  According to the latest findings, over 97 percent of Nigerians are at risk. And, it costs the government over $2.4 million every year. Ouch! And, the government wants to commit to being malaria-free by 2020.

That’s a tall order, though not entirely impossible. Over the last seven years, more than 100 million insecticide-treated mosquito nets were rolled out to protect approximately 28 million of the 33 million Nigeria households. And the FG is now calling on businesses to get involved in the fight against malaria to support the local production of malarial medicines and continuing the production and distribution of netting and preventatives.

In 2001, representatives of African Union countries pledged to increase health care spending to 15 percent in each of their territories. Nigeria, sadly, doesn’t spend anywhere near that amount. In fact, Nigeria spent less than four percent on health care in 2014. But there may be a glimmer of hope in Kano State.

Yusuf Attah, the Majority Leader in the Kano State House of Assembly, has stated that the state will meet that 15 percent allocation. This is good news for services in the state, and it sets a fantastic example to other Nigerian states, as well as the federal government.

Feeling Down? Time for a Workout

We’ve suspected it for a long time, and now there’s even more evidence that exercise can counter the effects of depression. Indeed, regular exercise may even make you immune to developing the symptoms and feelings of despair.

The medical journal, Preventative Medicine, has published research that demonstrates that exercising is indeed prevention for depressed mental health conditions. And, indeed, the more physically fit you are, the less likely you are to develop depression. Several other studies and research published in journals confirm these findings. Perhaps it’s time to treat yourself to new workout gear or anything else that inspires you to get moving.

At the recent West African Regional Conference on One Health hosted in Dakar, Senegal, West African countries agreed to consider animal health alongside human health. No, it’s not about veterinary services, but rather a movement to identify viruses that originate in animals before spreading to people. Experts believe that at least 75 percent of recent outbreaks, such as Ebola, begin with this type of transfer.

One Health seeks to perform national risk assessments to identify priorities. From there, the ECOWAS Regional Centre for Disease Surveillance and Control (RCDSC) along with the ECOWAS Regional Animal Health Centre (RAHC) will work to study and eradicate these risks.

Last year, 28 children in Niger State died after a few sleepless days and nights filled will hallucinations. While traditional believes led locals to comment that the families weren’t paying due deference to the ancestors, science proved it was lead poisoning.

It’s currently believed that over 3000 residents in mining villages have been exposed to excessive levels of lead. Though it’s a natural element, lead can cause serious health care concerns. These may include mental and physical difficulties, infertility, and cognitive development. And, disturbingly, lead can be passed to children through the placentas. While mining communities face the biggest risk, be sure to avoid lead-based paints, ceramic-glazed cooking pots, and any herbal or traditional remedies involving lead or the smoking of lead-soldered pipes.