Nigeria’s Bobsled Team is Headed for the Olympics 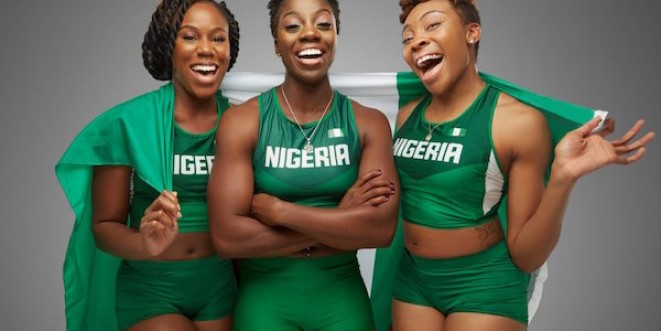 That Bobsled Team Is Making Headlines

L ast year, Seun Adigun, a former track and field Olympian for Nigeria built a bobsled and joined forces with Ngozi Onwumere and Akuoma Omeoga to form Nigeria’s first female bobsled team. Looking to compete in the 2018 Winter Olympics in South Korea, they launched a crowdfunding campaign and began rigorous training. Not only has Nigeria never sent a team (in any sport) to the Winter Olympics, but we’ve never had an African team – male or female – compete in the bobsledding category.

These dedicated Nigerian women are rewriting that history. After securing the sponsorship they needed from Visa, Adigun and her team managed to secure their spots in the competition during the recent qualifying events. Though we all hope they win gold, these women are amazing representatives for the country and the continent – no matter where they place.

Finding the right workout gear can be tough for many women – even when you’re an average height and weight. It’s not always easy to find the clothes that maintain a level of modesty (if you’re after it) while still being comfortable and remaining in place. It’s almost impossible for plus-sized women. That’s exactly what the American sports and leisure retailer, Academy, was hoping to change when bringing on a plus-sized fitness apparel line.

But, as you would imagine, the haters out there were fast to body shame the plus-sized model, fitness blogger Anna O’Brien, and her advertising images for the brand. And, it appears they couldn’t have found a better representative; her responses to body shamers were on point. She wouldn’t allow them to take the conversation to her personal levels of happiness and kept it to the absolute need for appropriate apparel to provide larger women with a chance to break the cycle. Both the retailer and Ms O’Brien deserve a round of applause for facing a need head-on despite what the naysayers.

It shouldn’t be big news when a woman (of any race) joins the ranks of an elite branch of medicine such as neuroscience, but it is – especially in Africa. As South Africa graduated its fifth African female into the field from the University of KwaZulu-Natal, the country’s media made Dr Nomusa Shezi’s accomplishments into headlines. And, given that first black female neurosurgeon in South Africa only qualified in 2013, it is still news.

As a young student, she dreamed of being the person to find a cure for AIDS but changed tracks as she pursued her undergraduate degree. Clearly, she’s come a long way. And, while it’s always an accomplishment to complete a medical degree (for anyone), hopefully, one day, female doctors of this calibre will be so ubiquitous that we won’t need to call it out. Dr Shezi herself is looking forward to the day “when we no longer celebrate the first black or first woman“.

If You Have a High BMI, You Need More Frequent Mammograms

Mammograms, the traditional X-ray screening method for breast cancer, are definitely not fun. But, it’s a test that every woman should be grateful to be subjected to. After all, early detection provides the best chance survival and beating breast cancer into permanent submission. Though there is some disagreement as to when you should begin mammogram screenings, it is generally agreed that it should begin in the early to mid-40s and again, annually – or every two years, until roughly age 70.

New research suggests that women with a body mass index (BMI) over 25 (which is considered overweight), more frequent mammograms may be necessary. In the Swedish study, which observed over 2000 cases, higher BMI was the primary determining factor as to which women presented large (advanced) tumours within two years of a mammogram. While you’re on the road to achieving your healthy weight, you may just want to schedule that appointment.

Planning to Indulge This Holiday Season, Try This Yoga Routine

By the time we get into the New Year, all those resolutions are already more difficult to maintain than they are now. You may have blown your budget on Christmas gifts and need to pick up from a point much lower than you expected. And, there’s a good chance you’ll have feasted your way through the holidays. Certainly, spending good times with family and friends should be part of the season, but the bloating and weight gain shouldn’t.

Luckily, Kim Rossi, a certified Kripalu Ayurvedic consultant and Kundalini yoga instructor, has put together a series of poses designed to aid digestion so you can make the most of those indulgent meals. Already a yoga pro? You’ll want to do body rotations, cat-cow, boat, seated forward bend, seated spinal twist, bow, and child’s poses (in that order). Not sure what all that means? You can see the instructions here. Then, head to our fitness pages for more exercise inspiration. It’s not only good for your body; you may find that exercise clears your head and keeps you