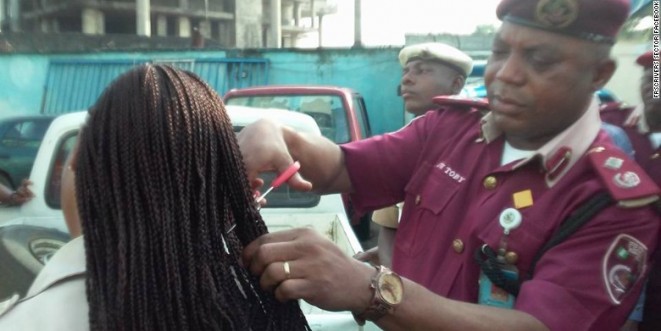 Anyone that has ever met an African woman knows just how central their hair is to their self-image. Whether left natural (which we absolutely support), or twisted into braids through hours of patient work, an African woman’s hair is a crown. Humiliation was clearly the motive behind the forceful hair cutting of two Nigerian Federal Road Safety Commission (FRSC) employees.

During an apparently routine FRSC hair and nails inspection, sector commander, Andrew Kumapayi, decided the long hairstyle worn by these women was inappropriate and immediately undertook to cut their hair. While this is hardly a case of physical abuse, the intention to shame women (who were arguably not in violation of FRSC guidelines) is abuse all the same.

With over 4000 reported cases of Meningitis, Health Minister Isaac Adewole has confirmed the deaths of 489 to this bacterial disease. Transferred by saliva and close contact with infected persons, this disease is largely preventable through vaccination; however, there is a shortage of these immunisations in Nigeria. More than 70,000 vaccinations have already been administered, and more doses are on the way.

Coupled with the prevalence of the C-strain, as opposed to the more common A-strain, Nigeria is facing an outbreak set to claim many, many more lives. Zamfara State currently claims the highest number of fatalities, with 216 deaths on record. Across the country, children under five are the hardest hit. Stay on top of the latest news by following #Meningitis on Twitter.

You Think What You Eat

For years you’ve known that healthy foods are important for your physical health. Your body can’t function properly on a diet of hamburgers and fried foods. You need varied nutrients and vitamins to ensure your body works as well as it can.  And, as it turns out, your brain needs certain elements to perform at its best too. A new study reveals what many have long suspected.

So what should you be eating? Plenty of leafy greens, seeds, and nuts for their vitamin E. You’ll also want the B12 found in fish and eggs. In whole grains, you’ll find vitamin E and B9 – and you want all of these. And, it shouldn’t surprise you that those tempting red meats and fried foods may actually lead to cognitive decline. Isn’t it time to make smarter choices… quite literally?

Over the past year, stories have emerged about the dangerous (and, often, deadly) conditions in the prison camps in Borno State. Previously, Amnesty International released reports detailing the state of these prisons which held women and children which had fled, been released, or escaped the violence of Boko Haram. Fearing they had been radicalised by the terrorist group, the Nigerian government detained hundreds in overcrowded and underserviced cells.

Recently, however, the government released nearly 600 women and children from Giwa military barracks. This is an incredible step towards reintegration and improved healthcare in the region. However, it will be exceptionally difficult to return to a normal life. Still, UNICEF and others are standing by to improve conditions as much as possible.

Regular Exercise May Be More Important than BMI

Some women exercise because they enjoy it. Others exercise because they want to lose weight. Whatever the reason, getting plenty of exercise may be the key to recovery after severe physical trauma – specifically strokes. As a recent study has shown, those who maintained fitness levels before suffering a stroke were more able to regain movement and complex functions than those who did not.

Okay, having more body fat does tend to raise the likelihood of experiencing a  stroke, but your BMI doesn’t affect how you recover – but your exercise activities beforehand will. What does this mean for you? You should get to the gym (or otherwise spend time exercising) even if you don’t have a specific weight goal in mind and even if you want to keep your curves. One day, it could just save your life.