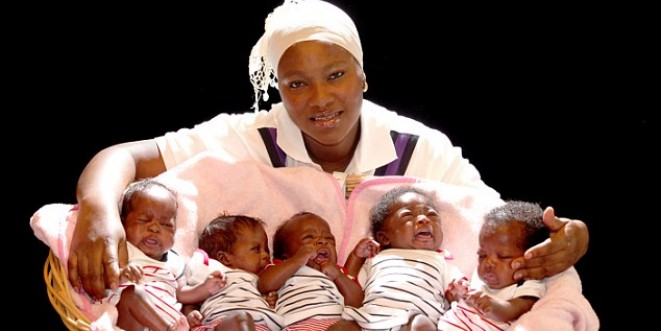 By now you’ve heard of Bimbo Ayelabola, the Nigerian mother of quintuplets. Her babies were born by caesarean at a hospital in the UK… and she hasn’t paid a cent towards her medical costs; UK taxpayers are footing the £145,000 bill. Now it looks like the UK government is requiring more stringent checks for scheduled deliveries.

While no one in an emergency situation will be turned away from medical care, the government and hospitals will be working together to ensure that women pursuing prenatal care have the right to access NHS services for free. If not, even expectant mothers may face deportation. Why the shift in policy? It’s become apparent that there are people “offering paid assistance to women in Nigeria to have their babies for free on the NHS.” Yikes!

If you know you need to lose weight, you’ve probably looked at one (or several) diets to help you achieve your goals. That’s certainly a proactive step (though, it must be said that exercise is also needed to get to and maintain a healthy weight). But, you need to be careful about the diet plan you choose. According to new research, women who followed an Atkins-style diet which is high in protein may not get the long-term health benefits they expect.

Test subjects following a high-protein, calorie controlled diet did lose kilos – about ten percent of their body weight. But, so did the control group whose calorie controlled diet included carbs and fats. The difference in insulin sensitivity between the two groups was staggering, however. Those following the high-protein diet still showed the inability to regulate blood sugar levels – the precursor to type two diabetes. Those eating carbs and fats demonstrated a significant improvement. A single test doesn’t tell the whole story, but it is a reason to consult a dietician before undertaking a high-protein diet – especially if you have or are at risk for diabetes.

On October 10, the International Committee of the Red Cross (ICRC) released a video demonstrating how Nigerian men deal with grief. It was part of their campaign for World Mental Health Day. The aim was to bring attention to the mental conditions faced by people in war zones. With continued violence and terrorism by Boko Haram in the north, it’s hardly surprising that mental health is an increasing concern in the country.

Dr. Olusola Ephraim-Oluwanuga, the Chief Consultant Psychiatrist, National Hospital, Abuja knows just how devastating these conditions can be. And yet, Nigeria only has eight psychiatric hospitals operating throughout the country – and they’ve been there since the colonial era. According to some, the number of people living with mental health issues is greater than those with HIV/AIDS? Want to help? Check out the ICRC’s website for more information on how to get involved.

FGM Still a Worry in Nigeria (Especially in Cities)

According to the latest information, approximately 20 million Nigerian women have undergone Female Genital Mutilation (FGM) – and that’s about ten percent of all the women subjected to this practice worldwide. There are zero medical or health benefits of this practice; meanwhile, FGM can lead to infertility and death. Want the facts? Check out this video.

A law making the practice illegal was signed by former president, Goodluck Jonathan, in 2015. But, the problem persists. The primary reasons rely on traditional reasoning. However, it appears that more of the 25 percent of Nigerian women who experienced FGM live in cities. Now, that doesn’t mean that cutting happens more often in cities, only that these women now live there.  Want the facts? Check out this video. Want to help end FGM? Check out the work of the NGO, 28 Too Many.

The Keys to Reducing Your Risk of Breast Cancer

Let’s face it; cancer is scary – no matter where in your body it could develop. No one wants to hear they’ve got cancer, and women in the know go out of their way to be as healthy as possible. And, studies have shown there is a lot you can do to reduce your risk of developing breast cancers.

The approach is three-fold. Consuming a low-fat diet has been shown to reduce risk dramatically. While you can’t cut fats completely, choosing vegetable, nut, and fish fats are your best bets. Another key component is alcohol limitation. You really should stick to a single drink on any given day (and that’s a small glass of wine). And then there is exercise. Not only does it help with weight maintenance, but it also decreases hormone levels. Regular exercise, cutting your alcohol intake, and smart diet choices could reduce your breast cancer risk by roughly 40 percent!

More Baby Factories Closed in 2016 Because…

At last count, 14 Nigerian “baby factories” were shut down by law enforcement this year. Last year, six were closed; the year before that, ten. One could look at the figures as a big step forward. But it could just be that more baby factories are operational in the country. Experts warn that selling children could become a bigger problem as Nigeria draws closer to a serious economic recession.

Though some children remain in Nigeria, where they are sold at much lower rates, there are reports of babies going for as much as US $5000. Some countries have suspended the adoptions of Nigerian children amid rumours of baby factories, but it’s time to press the government to ratify the Hague Adoption Convention which will make it more difficult for these centres to operate while allowing women in trouble a viable option.