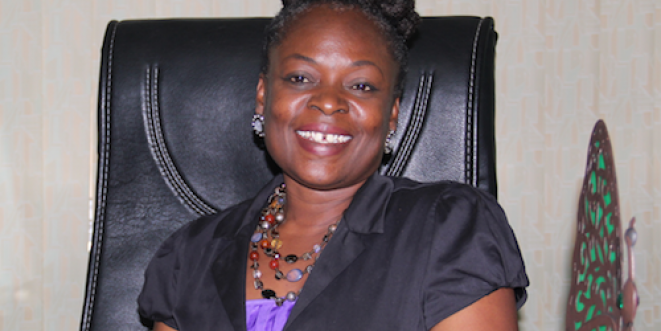 The name Itoro means “praise God.” After having four boys, Itoro Eze-Anaba’s mother rejoiced when she had her first girl. Young Itoro was raised to stand up and speak up, and this rare upbringing for a Nigerian girl would go on to influence her entire life.

“Even my mother is very uncomfortable with the result,” she says, laughing.

Itoro Eze-Anaba has spent a large part of her working life fighting for women and girls. In 2000, she mobilized nationwide support for Nigeria’s first Domestic Violence Bill. She could not understand why a man would beat his wife, and she was shocked that there was no law protecting women from violence in their homes, so she decided to do something.

It was during this advocacy that Eze-Anaba met a girl who was being sexually abused by her father. She could not help that particular girl on the streets of Lagos on that day, but the girl’s image refused to leave her until she did something.

In 2012, Eze-Anaba started the Mirabel Centre, an organization which provides succor for victims of rape and sexual assault. The first of its kind in Nigeria, it provides free forensic medical and counseling services. Mirabel got its name from the Mirabal sisters, four sisters who toppled the dictatorship of Rafael Trujillo, former president of the Dominican Republic.

Three of the Mirabal sisters were assassinated on 25 November, 1960, and their deaths turned them into symbols of the feminist movement. To honor their legacy, the United Nations General Assembly designated 25 November as the International Day for the Elimination of Violence against Women in 1999. Together, the three sisters were called Las Mariposas — the butterflies — and both a book and a film were made in their honor. Today, a huge blue butterfly stands on Eze-Anaba’s table, a symbol of history.

Prior to opening the Mirabel Centre, Eze-Anaba worked with the Women’s Consortium of Nigeria and with the Legal Defence and Assistance Project. In 2005, she traveled for her master’s in law at the American University Washington College of Law, where her work focused on gender and law. In 2007, she returned to start the Partnership for Justice Nigeria (PJN), which offers services to victims of human rights violations and facilitates the promotion of human rights in Nigeria.

While on a British Council trip to the UK, Eze-Anaba visited the St Mary’s Sexual Assault Referral Centre. On her return, she wrote a report for the British Council in which she expressed interest in starting a similar centre in Nigeria. With initial funding support from the Department of International Development (DFID), the Mirabel Centre was opened in collaboration with the Lagos State Ministry of Health.

“I wanted a place where a child walks in and gets some help,” she says, adding that although the work is emotionally daunting, it needs to be done. Today, the Mirabel Centre has attended to thousands of cases.

Eze-Anaba strives to ensure that the Mirabel Centre will stay open despite running out of its DFID funding. In 2015, the social media campaign #SaveMirabel raised money through a GoFundMe account, and in December of that same year, the fundraising partnership Friends of Mirabel was established.

Even as the Mirabel Centre struggles to survive, Eze-Anaba is not relenting in her fight for the sexually abused and is already looking to the future.

“We hope to establish the Centre in at least two other locations in Lagos State and other states in Nigeria,” she says.

If you would like to donate to the Mirabel Center, you may contact the office directly here. We have also partnered with the Mirabel Center to contribute a portion of sales from every single Radiant Health Magazine issue to the Center so it can continue its mission. Visit Radiant shop here.

[MORE]: Meet All the 2016 Radiant Health Women of Action