Get to Know Your Lemons 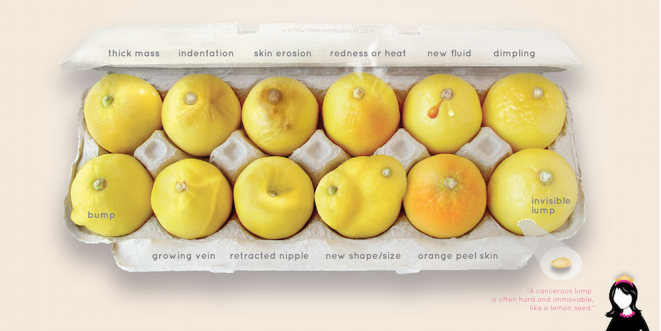 Get to Know Your Lemons

You may have spotted an image of an egg carton containing misshapen lemons floating around your social media recently. It’s part of the Know Your Lemons campaign – and it may be one of the most effective health awareness campaigns of all time. Each lemon represents a breast affected by cancer – and clearly demonstrates that there are visual clues in addition to the lumps that women may or may not feel during self-exams.

The goal of the campaign is to raise awareness and early detection of breast cancer so it can be properly treated. These images link directly with the World Health Organisation’s goal of reducing premature deaths (from cancer and other diseases) by 25 percent by the year 2025. Love the work of Know Your Lemons? Swing by their website to learn more, donate, or purchase images for your office.

Recently, a Nigerian club owner was arrested for the demeaning act of putting women on leashes and parading them around events. The women wore collars and masks as they walked on leashes attached at the neck. After his arrest, Pretty Mike, as he is known, was asked to sign an undertaking that he would never perform such dehumanising stunts again.

In a bizarre twist to the story, the club owner says he wishes people had considered his mission statement before publicly vilifying him. His aim, as he claims, was to draw attention to the way Nigerians (and men in general) put women on leashes. Whether it’s a matter of child brides or abusive partners, he wanted to garner attention to the cause. He certainly grabbed our attention.

Fibroids Are Not a Spiritual Curse

A study, “Knowledge of, Perception of, and Attitude towards Uterine Fibroids among Women with Fibroids in Lagos, Nigeria”, published in Scientifica, reveals that 67 percent of women in Lagos believe that uterine fibroids are the result of a spiritual curse. This belief often leads them to traditional healers rather than medical centres until the problem is simply unavoidable.

Though doctors and researchers do not know why fibroids develop, there is indeed a medical cause – it is not the work of the spirit. Most likely, fibroids are the result of hormonal fluctuations, hereditary causes, and possibly diet. The good news? Ninety-nine percent of fibroid tumors are non-cancerous. But, they can cause extreme pain and infertility. Even if they’re not life threatening, it’s always worth testing and treatment if you suspect fibroids. Unsure of fibroid symptoms? The Fibroid Centre at Shore Shore Women’s Clinic can answer your queries.

No Voter Card? No Sex!

Over in Kenya, voter registration is underway. The big push extends through the end of February. And, there may be a lot of Kenyan men feeling the pressure to register during this exercise – at least those with wives and girlfriends. There’s a chance they won’t be having any sex until they do.

As a member of the opposition coalition in parliament, Mishi Mboko has advised women to undertake just such a tactic in a move to get as many people registered as possible. It’s not the first time sex has been used (or rather, unused) for political purposes. A similar campaign was launched in 2009, forcing the (then) Prime Minister and President to reconcile. It certainly looks as though contentious elections are here to stay – across the globe.

There have been 19 confirmed cases of Lassa Fever across seven states since the beginning of December 2016. Six cases are confirmed deceased, and the Nigerian Centre for Disease Control is taking steps to prohibit the spread of the disease. Their focus is prevention and preparedness. For them, this means accurate, swift diagnosis of the disease.

At home, however, Nigerians are urged to ensure food stuffs are secured so rats cannot contaminate edibles. It’s important to recognise the symptoms (regardless of the states with infections and where you live). Fever, weakness, headache, and sore throat are usually the first noticeable signs. Should you notice any of these symptoms, tests are available at medical centres. In most cases, early diagnosis and treatment increases chances of survival.

You’ve Got a Sexy… Body Odor?

Researchers at Macquarie University in Australia recently found that men who consumed more vegetables tend to smell sexier to women. They also found empirical truth behind the theory that women smell sexier to men when they’re more likely to conceive. No, we couldn’t make this up.

According to the research, women tend to smell 25 percent more attractive when they’re at that peak point in their cycle – regardless of whether the pill is used as birth control. Men, on the other hand, don’t have great hormonal fluctuations. They smell better when they eat more eggs and tofu, plus pumpkins, kale, and tomatoes. Strange? Absolutely. But it does demonstrate that men, at least, are what they eat.

The World Health Organisation has moved into northern Nigerian en masse. Their goal? To vaccinate nearly five million children against measles. Children from six months to ten years of age may be receiving their first measles vaccinations. It’s a disease they may be particularly susceptible to given the malnutrition and other compounding factors in the area.

Similar to the polio campaign that rolled out in December has wild cases were uncovered, the WHO teams are moving as rapidly as they can to impact and save as many lives as possible. Children will be receiving more than vaccinations; they’ll also receive deworming treatment and vitamin A supplements to increase their body’s ability to survive on the meagre food they often receive.