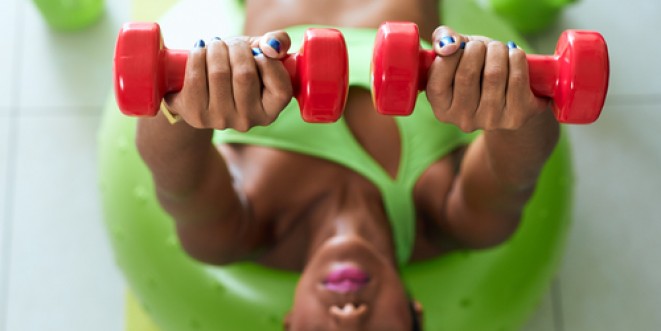 Many women ignore the weight section at the gym. Often it’s filled with men that seem to have a club you haven’t been invited to attend. But, many women just haven’t been taught how to lift weights safely or with exercises that will benefit their bodies most. But, according to the experts (and some recently published studies), strength training is one of the best ways for women to increase their chances of longer, healthier lives.

Strength training isn’t limited to free weights; it can also include yoga, pushups and lunges, and suspension training. Doing these exercises lowers your risk for type-2 diabetes and increases your bone density. Both are healthy benefits. If you’re not up for hiring a trainer to show you how to lift weights, check out our fitness pages for exercises you can teach yourself – or get started on that yoga promise you made to yourself last year.

This week, the Lagos House of Assembly passed its 2017 budget. Within that, the percentage allocated to health care dropped from 9.76 percent to 7.05 percent compared to the previous year. While the actual amount increased, it’s a step away from the pledges made that Nigeria will spend at least 15 percent on health care.

In December, the Assembly called on ministries to defend their budget. Clearly, health care is not seen as a priority in Lagos State or anywhere else. It’s been reported that nearly 90,000 preterm babies died last year, medical tourism continues (even in the case of President Buhari), and the primary health care facilities have all but collapsed. How can health care spending not be a priority in a country where doctors don’t receive their salaries but are still expected to save lives?

More than one patient has been taken to emergency care wards suffering from confusion, delusion, or collapse a few days into the New Year. The cause isn’t a deadly virus, abuse, or even drug and alcohol use. Extreme detoxing can create the same symptoms and some dangerous conditions. For example, your body needs a fair amount of salt, but you can flush it out through the overconsumption of water and liquids. You may think you’re doing your kidneys a favour, but the opposite is true.

So can detoxing be safe? It’s important to note that there’s a difference between the drug and alcohol detoxing regimen supervised by medical professionals in a rehab setting – and what the average person needs. Your body is continually working the toxins out of your body (that is, in fact, what your kidneys are for). You can certainly help your body along by choosing healthy fruits and vegetables, drinking water rather than soft drinks when you’re thirsty, and getting enough sleep. But, you should never undertake an extreme detox without consulting your doctor first; what may seem like a step towards better health could land you in high care.

Women and Girls Continue to Suffer under Boko Haram

On New Year’s Eve, another young girl walked into a Maiduguri market and detonated the explosives strapped to her body. A second girl was captured, and her bombs were safely detonated away from the crowds by security forces. Three more girl children were gunned down by self-defence fighters this past week. While the tactics are hardly new, the frequency of young girls used as suicide bombers is alarming. It’s sadly indicative of the plight of women and girls in the area.

Reports of rape are increasingly common in and outside of camps in the area. And, as President Buhari seeks to downplay the need for aid, conditions will simply become more difficult. In other parts of the world, the violence of Boko Haram and the dire conditions they’ve created is already largely ignored. Take time to mention it on your social media, too many people are unaware, and the president’s stance isn’t making it easier.

Getting Those Resolutions to Stick

It’s noble to want to become a better or healthier person. And everyone can find one area of their life they want to improve. But New Year’s resolutions aren’t usually the most effective way to achieve these goals. According to some, about 80 percent of all New Year’s resolutions end in failure, and many people lose steam by mid-February. But, that doesn’t mean you should skip the process or stop now.

While conventional wisdom suggests writing out your goals, tracking your progress, and rewarding yourself, there may be a better way to ensure you’re successful this year. Though business driven, the advice from Forbes is to make yourself accountable. People genuinely don’t like letting others down and will self-motivate to avoid it. This year, find a fitness buddy or have your partner remind you when you’ve allowed your progress to slow. And, if you’re having difficulty getting started, don’t forget about the Body Reboot Challenge. Make this the year your resolutions stick.

There are many factors preventing Nigerians from living the healthy lives they should. There’s an overwhelming lack of resources, especially in the impoverished and remote areas of the country. There’s also a traditional way of doing things that often flies in the face of established medical and scientific fact. And, there’s often an underwhelm of valid information available – even to the most affluent members of society.

To say that healthcare knowledge and delivery in Nigeria is a big problem is the understatement of the century. But, what can be done about it? How can the country, with a limited budget, make the dramatic increases needed? For a start, it’s possible to begin educating the people on their bodies, needs, concerns, and whether an ache is indicative of something critical. And, there is an organisation on the ground doing just that. The Live Well Initiative wants to develop health literacy. Why not take a look at what they do and consider volunteering your talents to make a brighter future for all Nigerians?