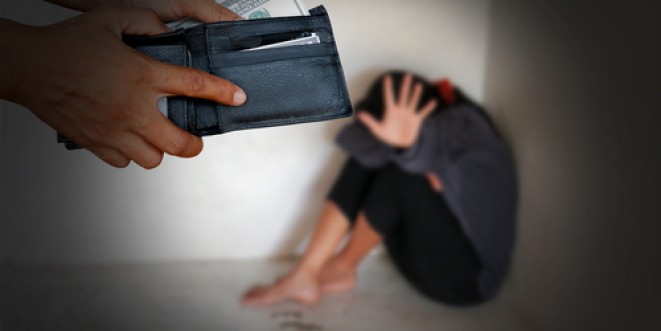 Take a deep breath before you read this. The International Organisation for Migration (IOM) has released figures showing an increase of Nigerian women entering Italy by sea. It is estimated that 80 percent of these women have been (and are being) trafficked for prostitution. In 2014, approximately 1500 Nigerian women arrived by sea. That number more than tripled the following year and reports from the first half of this year demonstrate a terrifying trend.

Typically, more than 85 percent of women hail from Edo state where they are given false promises of high-paying, safe work once they reach Italy. They are told it won’t be difficult to repay the EUR 15,000 transportation costs. However, girls as young as 14 or 15 are taken to Libya and forced into sexual slavery before even reaching Italy where they are told they now owe over EUR 40,000. Beatings are common and breaking the cycle is not. Read the story of Princess Inyang Okokon’s escape from this horrifying life and then check out her rescue organisation, PIAM. The website is in Italian and English, but you can request additional information in English through email.

According to the National Association of Resident Doctors (NARD), the Federal Government has failed to keep the promises made during the last round of negotiations. And, NARD is flexing its muscles once again. It’s called on its members at all 25 tertiary medical centres to suspend work until the government delivers on its word.

However, as Dr. Osagie Ehanire, Minister of State for Health, points out, fulfilling promises made is not as easy as it would seem to be. Many previously reached agreements are unwieldy (at best) and hastily signed by representatives before leaving office. To complicate matters, the Federal Government has just released N16 billion to all 36 states for the development of primary health care centres. It must feel a little like salt on a wound when many NARD doctors have simply not been paid their salaries for extended periods.

Western Foods May Increase Your Risk of Breast Cancer

Spanish researchers recently published an article in Obstetrics and Gynecology demonstrating a link between a fat-rich Western diet and increased risk of breast cancer. According to their findings, however, this connection exists only when the subject is overweight or obese; women with lower weights have not seen any such increase in risk.

The research shows that overweight women can expect denser breast tissue as a result of a Western diet. In case you’re wondering, the Western way of eating includes refined grains, processed meats, high-fat dairy products, sauces, and (of course) convenience and fried foods. And, while there isn’t a link between breast cancer and thinner women that eat these foods, you still need to eat them in moderation as they pose multiple health risks and very little of the nutrition your body needs.

You may recall news reports from March 2015 hailing the military exercises that cleared the forests in Bauchi State of Boko Haram bases. The Nigerian Army certainly uncovered plenty of weapons and ammunition during the operation that pushed Boko Haram away from Abuja.

But now, it seems, the terrorists are moving back. Senator, Isa Hamma Misau, of Bauchi state claims that Boko Haram seem to be moving back into Burra Forest, away from their base in Sambisa Forest. Defence spokesman, Brigadier General Rabe Abubakar, says this is not unusual given the work of the Multi National Joint Task Force (MNJTF) in breaking up activities in Borno State. The military appears to be moving with the insurgents, and that makes it difficult for residents in newly targeted areas to know who to trust.

Nigeria Plans to End Malaria Mortality in Less than 5 Years

The Minister of Health, Isaac Adewole, recently stated that the Federal Government has plans to end malaria mortality by 2020. That’s a big leap given that some 250,000 children currently die annually from this disease. That said, it is preventable, and it is treatable as long as attention is paid to both aspects.

However, the Minister of Health did not elaborate further on the plans for the eradication of malaria deaths. He did state that the government is working on a new health policy that will completely transform medical care in the country. Given the turmoil and inability of the Federal Government to deal with strike demands, it may be better to look at organisations such as Malaria No More. Based in the UK, they are working on concrete ways to eradicate the disease around the world.

Next Time, Reach for Some Weights

Many women falsely believe that strength training is just for men. They’ll jump on the treadmill or sign up for an aerobics class, but they’re unlikely to grab a free weight and get pumping. That’s because women have been taught that soft curves are pretty and bulky muscle isn’t. A healthy body, however, typically falls between these two extremes.

And, the development of muscular tissue aids women with increasing their metabolism, developing stronger joints (which certainly comes in handy later in life), and easing the pain of menstrual cramps. As this article demonstrates, you don’t need to look like a body builder to reap the rewards. All you need to do is learn a few simple moves (which you’ll find here) for a healthier body tomorrow.